Before the pandemic, Michael Gomez considered hiring more people to keep up with the demand. Once the state shut down, he focused instead on just keeping his business afloat. Indianapolis Star

A handful of merchants at the historic Indianapolis City Market are opting into the market’s new rent deferment program as both tenants and the market’s board of directors battle an ongoing financial struggle that has mounted over the past year.

Meanwhile, the market is still shoring up its finances to figure out how much it will request in aid from the city to remain afloat.

And although the market owes the city roughly $408,000 from a remodeling effort back in 2007, the city will not seek a repayment of that loan, a city spokesperson said.

The latest rental setup comes as the City Market, which is owned by the city and operated by a board of directors appointed by the mayor and the City-County Council, embarks on a long-term strategic planning process.

That includes the possible reinvention of the market as both a daytime and nighttime destination, one potential solution for remaining profitable in a post-pandemic world that could carry a lighter lunch crowd.

Six merchants are opting to pay the market 10% of their gross sales in rent, market director Keisha Gray told board members at a meeting on Thursday. Another three are opting to pay 50% of their rent. Tenants must pay the difference between this new amount and their normal rent in the future.

The board also voted to allow two tenants — Poke Guru and Spice Box — to depart City Market while still requiring them to pay rent through the end of their lease. The tenants could work with the market on a payment plan if necessary.

Briggs:Kill City Market to save it

“I do ask subjectivity be used in this situation given that it’s already filled with a tenant,” Naidu said.

A man sits alone reading a newspaper after lunch Wednesday, April 28, 2021, at City Market in Indianapolis.

But Gray expressed a desire to hold all tenants to the same standards without making special exceptions, a management style that she noted had not always been the case in the past.

“I would also venture to say though that the merchant culture in City Market is at a point where it is shifting and changing for the better,” Gray said. “From what I can see there were some things that were not applied across the board. There had been handshake deals for this, that and the other, and that does not create a team atmosphere with the merchants that are there.”

Meanwhile, City Market has yet to finalize an exact amount of funding it will request from the city. One previous estimate given in a public meeting was $200,000 to $250,000.

A city spokesperson says the city intends to forgive the loan pending any necessary paperwork. 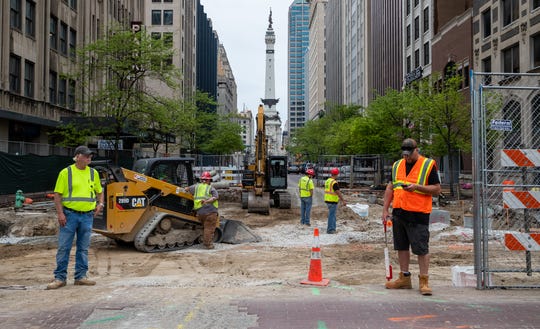 Workers wait for traffic to pass as construction on Market Street near the City Market on Wednesday, April 28, 2021.

The market, which has projected running out of money in mere months without extra help, has received significant funding from federal funds designed to help businesses during the pandemic.

Most recently, Tomlinson Tap Room received roughly $168,000 in funding from the Small Business Administration, Gray told the board Thursday.

“We consider that a huge win for us in being able to advance the taproom and moving forward,” Gray said. “And again as we are doing strategic planning for City Market as a whole, it’s possible that Tomlinson Tap Room can play a larger part in that.”