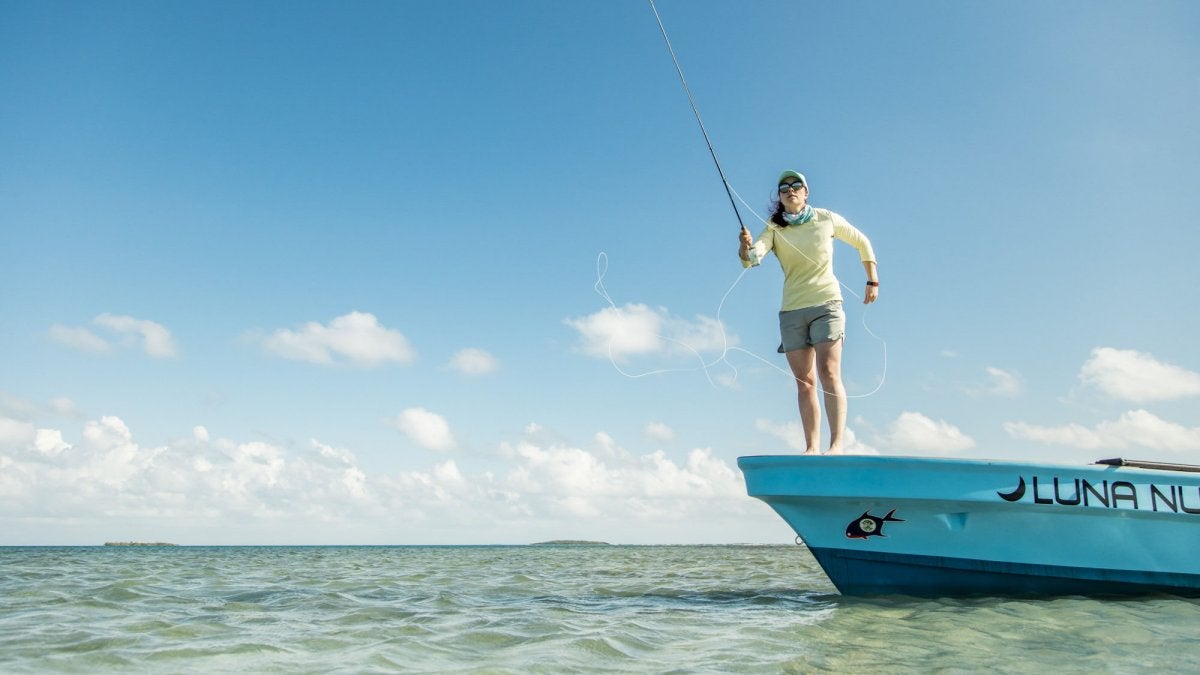 It’s hard to go wrong when you’re spending the day on the water. And if you’re like us, you’re always looking for that new favorite zone. From fishing clear blue water in Central America to paddling splashy rapids in the desert to spending a chill day at the lake, we’ve got you covered with bucket-list-worthy recommendations for every kind of waterman and -woman.

Some of the world’s best flats fishing is right off mainland Belize in the middle of the turquoise-blue waters of the Caribbean. Imagine being surrounded by white-sand beaches and clear water as you sight-fish for permit, tarpon, and bonefish on wadeable flats. While anglers could spend a lifetime casting in the shallows, Turneffe’s vibrant coral reef also begs to be explored by scuba or snorkeling. Stay at the Turneffe Flats and take advantage of the extensive knowledge of their local guide staff, who’ve been fishing the atoll for decades.

While the Keys are just off the coast of Florida, they might as well be on a different planet. For starters, the Keys’ endless grassy flats offer up unparalleled saltwater fly-fishing. This string of tropical islands has scenic beaches and absolutely massive (and very photogenic) permit, tarpon, and bonefish. Amazingly enough, it’s possible for avid anglers to catch all three of those species in a single day, which is called a “grand slam.” For your best chance at fooling a permit on fly, book a charter with the experts, like Captains Brandon Cyr or Jared Cyr. Best to book this trip ASAP, as trips in the Keys book out far in advance.

We know how epic heli-skiing in Alaska is, but what about heli-fishing? Yep, at Tordrillo Mountain Lodge, a 40-minute flight from Anchorage, it’s a thing. (And in June, you can do both—ski morning corn and fish for king salmon in the afternoon.) In addition to accessing incredible fishing spots by helicopter, you can fish a year-round population of rainbow trout in the Talachulitna or book into a wade or float trip with the lodge’s über-knowledgeable guides. “A lot of diehard fishermen come up just to target the rainbows,” says Tordrillo Mountain Lodge owner and guide Mike Rheam. If you need a break from fishing (you won’t), you can go hiking, rafting, SUP’ing, or wakeboarding, do a via ferrata, or hang out in the hot tub.

There’s really nothing like the Everglades. Paddle through mazes of mangrove tunnels, grassy marshes, bays, and rivers. As you explore this otherworldly landscape, try to spot one of the area’s 360 bird species and be on the lookout for crocodiles, alligators, manatees, or even a Florida panther. Trip options abound, but you’d be remiss not to kayak or canoe to one of the chickee huts—open-air wooden platforms hovering above the water—and spend the night. There are countless established paddling trails, like the 99-mile Wilderness Waterway, the crown jewel of backcountry canoe trails. If you need a canoe or kayak, you can rent one from the Flamingo Visitor Center.

This unspoiled 1.1-million-acre wilderness should be on every paddler’s short list. The Boundary Waters has more than 1,000 lakes, rivers, and streams that are linked together by trails, known as portages. This paradise snuggled up in the lush Superior National Forest has 1,200 miles of canoe routes, 11 hiking trails, and a whopping 2,200 campsites. With dozens of entry points, you really can’t make a wrong decision, but a good place to start is in the gateway town of Ely. There you can outfit your trip or book a guided one at Ely Outfitting Company. Dave Freeman, who works as a guide at Ely Outfitting Company, says one of his favorite routes is from Moose River North up to Lac La Croix and then back down to Mudro Lake. “It’s a great six or seven day trip and has a little bit of everything,” says Freeman. “Some of the most vivid Native American pictograph sites in the Boundary Waters can be seen on a dramatic cliff face on Lac La Croix that drops straight into the water.”

Expect to be fully charmed by the ferry ride (or seaplane flight) that takes you to one of the main islands in this 175-island cluster just off the coast of Washington State. Aside from the green old-growth forests and abundant wildlife, the big magnet here is the sea kayaking. Paddle through the wavy Salish Sea to quiet beaches and set up camp right next to the water. And for the cherry on top: San Juan Island, one of the bigger islands, is one of the best spots in North America to watch for orcas. If you’re interested in a guided experience, go with the professionals at Shearwater Kayak Tours, on Orcas Island, or Crystal Seas Kayaking, on San Juan Island.

The splashy whitewater in Westwater Canyon is best enjoyed as a two-day special––perfect for a weekend adventure in the Utah desert. Hop on this 17-mile section of the Colorado River, which slices right through narrow canyon walls in between stunning black cliffs and red sandstone faces. This section has 11 named Class III–IV rapids. Before setting up camp next to the river for the night, explore side canyons and Native American petroglyphs. Enthusiastic paddlers can lengthen this trip on either end for more fun. Go it on your own or book a day trip with the folks at Moab Adventure Center.

The 186-mile-long man-made lake is flanked by sandstone walls and striking formations, and has a staggering 1,900 miles of shoreline with soft, sandy beaches. Lake Powell is just a few minutes from the iconic Horseshoe Bend and lies mostly in Utah. It’s basically the fun capital of the Southwest. Explore side canyons via kayak with beta and rentals from Paddle Lake Powell. Book a multistory houseboat for a few days of luxury from Lake Powell Resorts and Marinas, or snag a jet boat if you’re looking for a more high-octane excursion.

It’s hard to beat the low-key summer-camp vibes on offer at Lake George, in New York’s Adirondacks. Camp at one of the nearly 400 campsites (try to snag a spot on one of the 50 islands that allow camping). Cruise the lake, hike to a waterfall, cycle the 17-mile Warren County Bikeway, or take a dive to see sunken British ships from the French and Indian War. Board a historic steamboat for a tranquil and scenic 2.5-hour cruise on the lake with Lake George Steamboat Company (bonus: there’s a cocktail bar on board). Grab a beer at the Adirondack Pub and Brewery or, if you’re more of a wine person, head for the lakeside Adirondack Winery.

Just two hours from the coastal town of Split is the wondrous Plitvice Lakes National Park—the country’s first—in the Dinaric Alps. The park is home to sixteen lakes filled with crystalline turquoise water, all connected by a series of wooden walkways. Wander alongside the bucolic waters, hike past waterfalls, and take a ferry across Kozjak Lake to the Upper Lakes and try to remind yourself that what you’re seeing is real. Pro tip: get to the park right when it opens for a little extra solitude. If you need more time, book a night at Hotel Jezero, located inside the park about 1,000 feet from its largest lake.

Costa is the first sunglass brand founded by anglers to offer color-enhancing lenses that amplify experiences on the water. Costa pours functionality, experience and meaning into every drop of eyewear, deepening the wearer’s connection to the watery world. Check out our frames made For Those Who Need Water to Breathe.