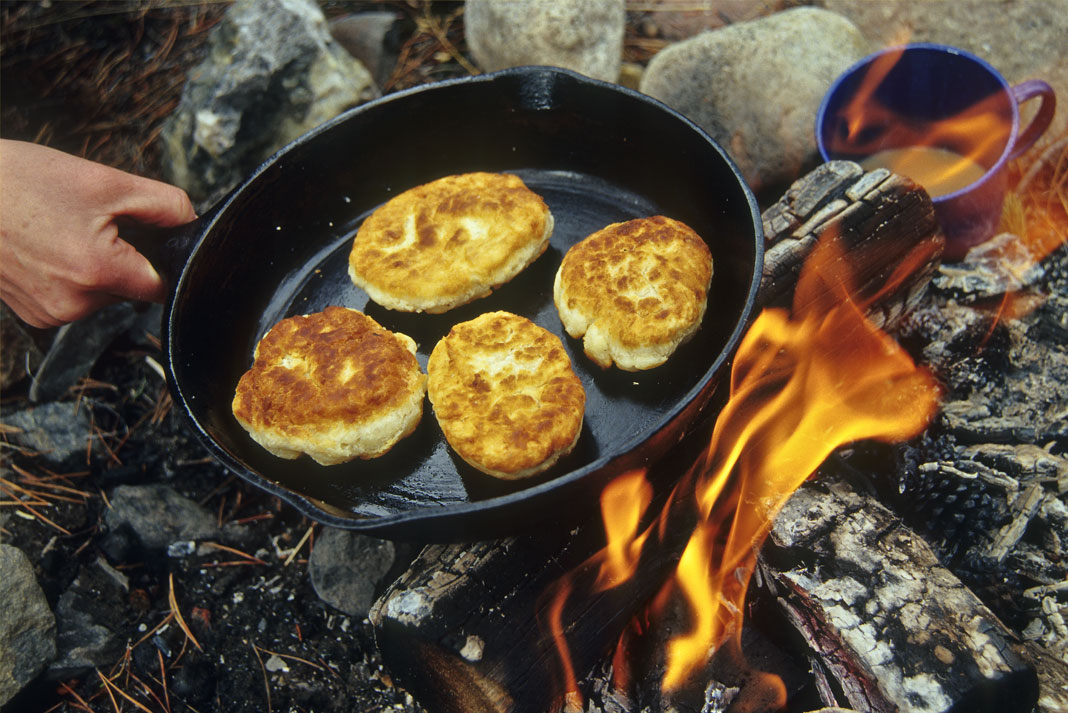 The Surprisingly Tasty History Of Bannock, The Classic Camping Cuisine

To identify a hardened wilderness canoe tripper, I watch how someone paddles a J-stroke, lifts a canoe and whether they use a tump. But I can also rather reliably tell whether someone is a seasoned pro or a greenhorn newbie by merely noting what kind of bread they eat on trip.

Mix all dry ingredients and add water slowly until dough is slightly sticky. Separate into three to four patties and fry in an oiled frying pan over moderate heat until both sides are golden brown.

Bagels are popular amongst weekend warriors, tortillas are for graduates of weeklong trips—but when a canoeist regularly makes bannock, well, you’re pretty much guaranteed they’ve spent quality time in the bush.

Making a morning batch of bannock is common on my trips. I love watching a loaf’s golden-brown top take shape, and the glorious sweet smell when I hand out the first steaming chunk is pure bliss—even if it does contain a few dead mosquitoes. Store-bought bread becomes moldy or stale by day five or six. Made daily, bannock can keep you stocked with fresh bread for a whole summer.

Modern-day trippers love this no-fuss recipe for the same reason it’s been a staple of wilderness wanderers for centuries. It’s stable, quick and easy to make. Bannock is also a hefty source of carbohydrates. A fist-sized serving offers roughly 310 calories and is adaptable to any mealtime. Smother in jam for breakfast, layer with hard cheese for lunch, or dip in a bowl of hot stew for dinner. Yum.

Most Indigenous nations across North America have some traditional version of bannock. The Inuit call it palauga, it’s luskinikn to the Mi’kmaq, while the Ojibway nation calls it ba’wezhiganag. Before European contact, unleavened bannock was made from the starches derived from ground maize, roots and bulbs, and lichens and mosses. It was cooked on flat rocks over the fire, twisted around a green stick or heated in cooking pits.

It’s believed Scottish fur traders introduced modern bannock to North America during the 18th and 19th centuries. Called bannuch, Gaelic for morsel, it was first made of barley and oats; wheat flour was later introduced. Bannock soon became a staple for trappers, prospectors, voyageurs, and First Nations groups. Today, gourmet bannock baking is big business and a staple at many Indigenous-owned restaurants.

The simple four ingredient recipe has remained much the same for wilderness wanderers, however. When made by canoe tripping enthusiasts traipsing from lake to lake for weeks on end, it’s now most often fried in a cast-iron skillet, baked in a reflector oven or wrapped around a green stick the old-fashioned way.

Just remember, never slice a piece for your fellow campers. You can’t cut bannock; that’s bad luck. Instead, tear off chunks and hand them around, steaming hot, the way it’s always been done.

Kevin Callan is the author of 18 books, including the bestselling The Happy Camper and his popular paddling guides.