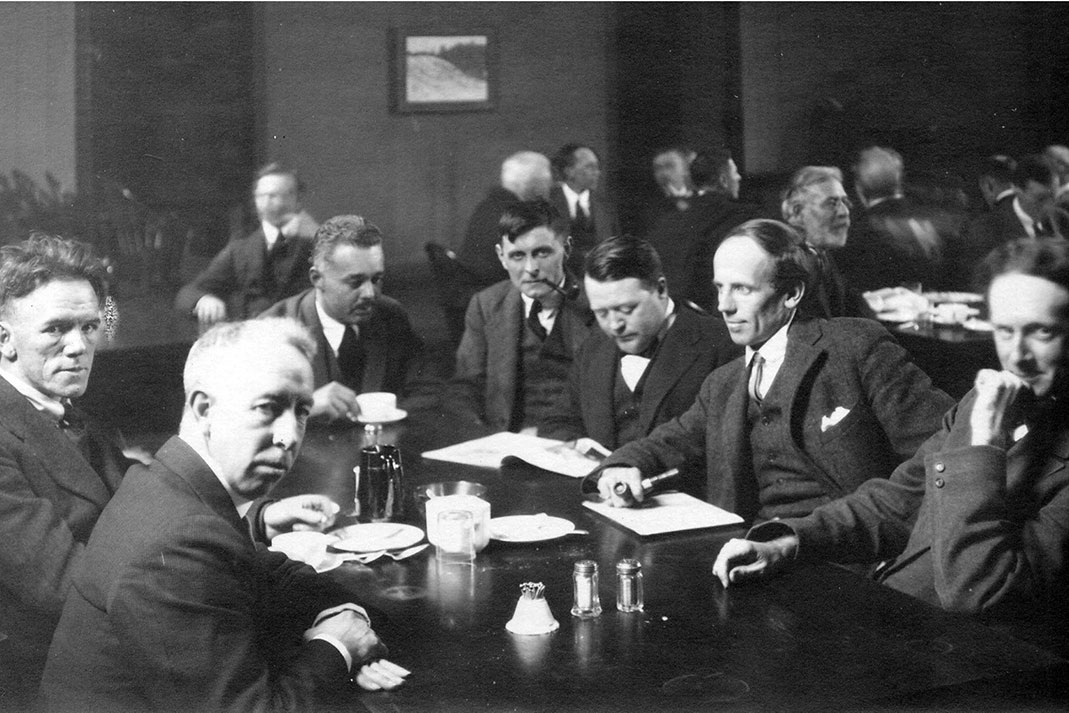 The Secrets Of The Group Of Seven Continue To Be Discovered

Their paintbrushes swept expertly through the oil paint, not unlike their paddles cut deftly through the water. It’s been 101 years since the Group of Seven first showed their works in downtown Toronto, Canada, and helped shape a distinctive Canadian art style. Though they received scorn for their untraditional rugged landscapes at first, the painting sites in Northern Ontario kept calling them back.

Many of their iconic images would have been impossible to create without canoes to access the painting sites. Blackflies in their brushes be damned, the Group painted, paddled and camped for weeks and months at a time to capture remote vistas.

Many of the Group of Seven painting sites are still untouched. Through research and intimate knowledge of the landscapes through their own many trips, intrepid paddlers Gary and Joanie McGuffin have found and mapped hundreds of the exact locations where the artists sat and sketched or painted.

According to the McGuffins, there is still much work to be done to identify additional painting sites and ensure responsible ways to share these national treasures with the rest of the world.

The Group of Seven

Considered among the most famous of Canadian artists for their wilderness landscape paintings, the Group of Seven should have been eight. The seven founding members in 1919 were Franklin Carmichael, Lawren S. Harris, A.Y. Jackson, Frank Johnston, Arthur Lismer, J.E.H. MacDonald and Frederick Varley.

Tom Thomson is often considered the eighth member and credited with cajoling the group out of the city and into Algonquin Provincial Park. Thomson died in a canoeing incident in Algonquin in 1917 before the group officially formed, but their works are often displayed together. His influence on the Group of Seven is unmistakable.

“The North Country and painting were his life and he made us partners in his devotion to it. We canoed and camped, lived and painted drawn together by an irresistible urge to concentrate our vision to create an art embodying the very character and spirit of the country,” wrote Lawren Harris of Thomson in a letter to a friend.

While the Group of Seven were artists, they were also adventurers—even rebels—looking to break from traditional European art methods and the confines of urban life. Bold color palettes, liberal use of paint and the precision of their imprecision captured the essence of strength and fragility in nature. Fracturing light and shadows, foreground and distance, they froze moments, offering a fleeting glimpse of Northern Ontario.

Many of their paintings were from the Ontario paddling paradises of Algonquin, Georgian Bay and the Algoma regions, but over the years, the Group of Seven traveled and painted the Arctic, Rockies, East Coast and Quebec.

Their first exhibition at the Art Gallery of Toronto was May 7, 1920. Before the exhibition, it was widely believed the Canadian landscape was not worthy of being painted. Of the 120 paintings on display, just six sold. Being such a departure from the European tradition, the criticism of their work was derisive, yet something captured the hearts and imagination of the masses.

“In these strong and solemn landscapes of the north I felt as if the Canadian soul was unveiling to me something secret and high and beautiful… And so, the work of the Group of Seven resulted from a love of the land, and it was this spirit that instructed us how the land should be painted.”  ~ Lawren Harris

“The Group of Seven not only translated what they saw into a vivid visual language of their own, but through that language they taught us to appreciate the natural beauty of Canada in all its vast scale and variety,” said Ian A.C. Dejardin, executive director of the McMichael Canadian Art Collection. “Many Canadians continue to see the country through the Group’s eyes.”

In commemoration of the centenary of their first exhibition, more than 280 of the Group’s finest pieces are displayed in a yearlong exhibit at the McMichael gallery in Kleinburg, Ontario.

Because the Group of Seven did not keep notes of where each artwork was made, each painting is a puzzle waiting to be solved. The hunt to identify the locations of the sketches and paintings and the routes the Group paddled is at the heart of the McGuffins’ 2015 film Painted Land: In Search of the Group of Seven.

The award-winning documentary toured viewers through archival film footage, letters, journals and photographs. Viewers see the Group less as artists and more as avid paddlers, campers and hikers. Drone footage shows the McGuffins and art historian Michael Burtch paddling the same lakes and hiking the same bluffs as they pinpoint the exact locations where the Group of Seven painted. It’s a modern-day treasure hunt.

In 2009, the McGuffins and Burtch set out to identify 100 locations where the Group of Seven’s most iconic paintings were sketched. Those sketches were small-scale paintings made as references to inform their later large-scale oil paintings. The trio quickly surpassed the goal as they found that one location could lead to discovering several painting sites from more than one member of the group.

From the remote locations they sketched from, it’s obvious some of the Group of Seven were formidable in their paddling and hiking. They were trailblazers through the natural landscape as on the canvas. Neither rapids nor steep, slick verticals stopped the painters from lugging their paint kits to the perfect wilderness vantage points between 1918 and 1928.

Gary McGuffin and boatbuilder Skip Izon designed the McGuffins’ tandem canoe used for the project, which was then manufactured by Souris River Canoes in Atikokan, Ontario. The Skeena aimed to be light enough for portages, maneuverable for rapids, seaworthy enough for Lake Superior, with a bow design to make it easier to pull up on shore.

Though a handful of the Group’s painting locations are publicly known, the McGuffins hesitate to publish the GPS coordinates of the more than 400 painting sites they have identified just yet. There’s little or no infrastructure to ensure responsible tourism or provide the cultural interpretation for the region they feel is critical. The McGuffins want all the sites to be respected and honored so others can paddle the same waters and experience a unique part of Canadian history for themselves.

Gary’s current project is to enter all site coordinates into a database that will live online and eventually allow users to virtually visit the Group’s painting sites. He imagines a catalog raisonné, a comprehensive, annotated listing of all the known artworks by each Group of Seven artist paired with a photo and description of the site that inspired it.

“You might have been paddling by it your whole life—just deke 20 feet off the portage trail and it’s right there,” he says.

While some painting sites are protected within the boundaries of provincial and national parks, many are not. As conservationists, the McGuffins hope the painted areas will gain notoriety and protection, perhaps as a UNESCO World Heritage Site. The McGuffin’s grand, long-term vision is an economic shift to replace resource extraction and industrial development in Northern Ontario with eco- and cultural tourism as its primary economic driver.

“Morning mists still grey on the river…sketch kits loaded…the canoeists
are off down the river … gliding through yellow floating leaves, breaking the still reflections of crimson, and gold, and green.”  ~ J.E.H. MacDonald

The goal of preserving the Group of Seven corridor for future generations motivates the McGuffins to continue searching for more painting sites. This summer, Gary will turn his attention to the Slate Islands. Not only is it one of his favorite areas to paddle along Lake Superior, but he is confident he’ll identify more Group of Seven painting sites here. Even if his and Joanie’s conservation efforts are overruled by industry or in the name of progress through more wind turbines or dams, which changed the face of paintings like J.E.H. MacDonald’s “Falls, Montreal River,” the painting sites will be preserved through photographs.

Today, some of the painting sites are inaccessible to the public because they’re on private property or because the infrastructure to access them, like the Algoma Central Railway, has been shuttered. However, along the North Shore, Naturally Superior Adventures offers a multi-day Group of Seven themed sea kayak tour on Lake Superior from Jackfish to Pukaskwa National Park. These islands and inlets, coves and coastlines, endless skies and distant horizons called to Harris, Carmichael, Casson and Jackson throughout the 1920s. Part of this stretch includes Neys Provincial Park. A steep 4.5-kilometer trail to the Pic Island Overlook is the site of several Group of Seven paintings.

In busy Algonquin Provincial Park, it’s well known Tom Thomson painted at dozens of sites around popular and accessible Canoe Lake. However, the McGuffins fear painting sites may be loved to death if exact locations are publicized. The McGuffin’s second goal is to support interpretative tours to weave Group of Seven art history with natural history and Indigenous knowledge of many of the painting sites.

“The campsite and the portages were always there. That’s where the Group painted because that’s where people have always been,” Gary adds. “We want to preserve the integrity of the sites while sharing this knowledge with the world.”

In the meantime, Bartlett Lodge resort and The Portage Store, an outfitter and retailer, offer occasional Group of Seven themed tours in freighter canoes.

For those wanting to celebrate the centennial of the Group of Seven without getting off the beaten path, there are driving tours in the Algoma and Algonquin regions. You can also experience the paintings firsthand at the National Gallery of Canada in Ottawa and the Art Gallery of Ontario in Toronto. But with the Group of Seven’s paintings paying homage to the wilderness, the best way to celebrate their 101st anniversary is by paddling and hiking among the rocks, trees, lakes and skies mirrored on their canvases. Tread lightly.

Dr. Nadine Robinson is an award-winning freelance writer and outdoor enthusiast. She is based in Northern Ontario; you can find her online at @theinkran.

On Georgian Bay, Joanie McGuffin holds up a reproduction of Windy Day: Rough Weather in the Islands by Tom Thomson. The original painting hanging in the National Gallery of Canada was gifted to Dr. James MacCallum in 1914 when Tom Thomson was staying at his cottage not far from where this sketch was painted. | Photos by Gary McGuffin