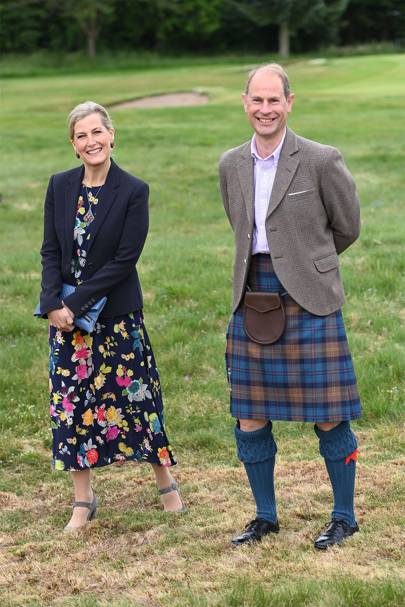 A curious fact about senior Royal Family members is that they may be in possession of a number of different titles, used depending on where they are in the United Kingdom at a given moment. Prince Edward, for example, adopts the name the Earl of Forfar when in Scotland, a moniker that he will certainly have utilised during a visit to Forfar Golf Club today.

A comprehensive guide to the Royal Family’s regional titles

The Queen’s youngest son was joined by his wife, the Countess of Wessex, for the engagement at the club on Monday 28 June. There, Sophie practised her swing on the golf course, and the couple were photographed with a tree that they planted during a previous visit in 2019 – now a healthy young sapling. The Cunninghill club told local news site thecourier.co.uk that it was ‘delighted’ to receive the royal couple.

Edward was granted the Earldom of Forfar by the Queen two years ago, to mark his 55th birthday on 10 March 2019. This means that whenever the prince and Sophie travel to Scotland they are officially titled the Earl and Countess of Forfar. Having previously visited the Earldom in July 2019, the couple were warmly welcomed back for their return trip this week. The countess looked elegant in a dark floral print dress and blazer, while Edward donned a special kilt for the occasion. It’s made from Earl of Forfar tartan, which was redesigned and named in the prince’s honour by the Strathmore Woollen Company in 2019.

Senior, married officials among the Royal Family can possess various different regional titles, which only become their primary titles when they’re in that area. This is because Scotland was its own independent country until 1707, and hence has a separate system of nobility, while some royals have further names in the six counties of Northern Ireland, too.

Edward and Sophie aren’t the only Royal Family members visiting Scotland at the moment. The Queen has joined forces with her daughter, Princess Anne, and grandson, the Duke of Cambridge, for what’s been dubbed ‘Royal Week’ – constituting a roster of special engagements for the family north of the border.

As the Queen arrives in Edinburgh for Royal Week, we bring you the most glamorous Scottish houses to book now

Sign up to the Tatler About Town newsletter to receive the latest party pictures, fashion inspiration and royal news straight to your inbox.