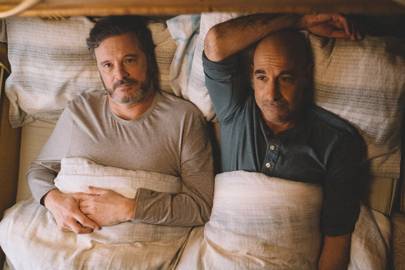 Supernova review: Tucci and Firth shine in a quiet film about dementia

There’s a moment near the start of Supernova where Colin Firth, playing a fading concert pianist called Sam, gets carried away in an A-road service station. He knows he shouldn’t dawdle but he does – and who could blame him, presented with such an Aladdin’s cave of very English wonders: kettle chips, sexy little jars of instant coffee, hobnobs. By the time Sam leaves the shop and gets back to his caravan, it’s too late. Tusker, his partner of 20 years – played with megawatt twinkle by Stanley Tucci – has disappeared.

The panic sets in at once. Sam kicks the caravan into life and tears through the tight leafy lanes, searching for his lost lover. He finds Tusker in the glare of a stranger’s headlights. Tusker is confused. Embarrassed. Eerily vulnerable. Together the two men return to the warmth of the caravan, each as shaken by their abrupt separation as the other.

Supernova is a tender film about how terminal illness – in this case early onset dementia – reaches into the inner sanctum of even the closest relationships and warps them beyond recognition. Tusker has been Sam’s rock for decades, the more charming, funny and accomplished of the two. But he’s beginning to forget — how buttons work, the way that bannisters sit on staircases, where he is. Most bewildering of all, for a novelist, Tusker is losing his ability to compose a decent sentence – while Sam is under the impression he is fomenting his next high-brow book, in reality Tusker can barely curve the nib of his pen around a letter.

The film is unhurried, so gently paced that sometimes it tips from being classily languid to a little dull. Sam and Tusker have left their house in the big smoke to visit Sam’s avuncular sister in the Lake District; the holiday is to culminate in a concert Sam will play after a long hiatus from professional music. For him, the trip is a much-needed break from the months of stress that have followed Tusker’s dementia diagnosis. For Tusker, it’s his last holiday. He doesn’t want to come back from the Lakes alive.

The best parts of the film are when Sam and Tusker are alone together, repeating the small kindnesses that old couples show to one another without conscious effort. Their urbane backstories seem ripped from an Ian McEwan novel and are so cursorily explored that they sometimes feel a little unreal. The tenderness the two display to one another does feel true, though. It shouldn’t be unusual to watch two such famous actors show this sort of physical devotion to one another in a Sunday-afternoon film, but of course it does feel unusual, and with luck Supernova will help normalise the portrayal of queer love onscreen.

Despite Tucci and Firth’s charisma, however, the script isn’t consistently strong enough to support the weight of the film’s themes: suicide, terminal disease, the loss of great love. It’s dismaying to watch Tucci and Firth have to deliver sometimes meagre lines – their bodies are so much more expressive than the words they’re having to say. Still, the film is redeemed by their performances and by the staggeringly beautiful scenery in which the tragedy plays out. I can’t think of a film that better captures the tawny beauty of the Lake District, with its remote Monopoly houses lodged in silent valleys. It’s worth a watch for the landscape alone.

Supernova is out in cinemas today.