Officers with the Indianapolis Metropolitan Police Department shot and killed a man on Friday, May 14, 2021, after they say he pointed a gun at them. Indianapolis Star

A child was outside, riding her scooter and enjoying the sunshine. Her grandmother, Diane McGee, reminded her to stay out of the street while a car drove by. Michael Crowdus checked his mailbox and swept his front yard. Neighbors gathered outside and talked, but this time, mostly about the 48-year-old man who was shot to death in front of their homes the night before.

On Friday evening, the Indianapolis Metropolitan Police Department’s response to an incident at an apartment complex in their neighborhood turned fatal. Police received a report of a suicidal person there . Officers shot Monolito Ford as he was walking toward them, and raised a gun in their direction despite commands to stop, according to an account from IMPD in a news release the agency issued on Saturday evening.

The shooting left a lot for residents to discuss.

One man — who wasn’t home at the time of the shooting — saw one of his neighbors, Charles Goodman, and asked “What happened?” They talked for several minutes, both agreeing it was a dangerous situation.

“I’m just glad I wasn’t here either,” Goodman said. “Because, I mean, there was nothing I would have been able to do for him anyway. And I probably would have been scared seeing somebody holding a gun, walking back and forth.”

“You wasn’t home, was you?” another man, Michael Crowdus, asked of his neighbor Diane McGee. He had tried calling her Friday evening, but she didn’t answer. They both live directly in front of the location where the shooting took place.

Autumn Trails Apartments on Saturday, May 15, one day after a fatal police shooting took place.

Crowdus said he was home watching TV when he heard “a barrage of bullets.” He said he didn’t look out his window or go outside because he’s heard gunshots in the area before. He only walked by the scene for the first time the next morning, when he went to check his mail.

De’Aire Gray death: De’Aire Gray’s battle with schizophrenia began in 2015. It ended when police shot him.

“This is an emergency situation here in Indianapolis,” Crowdus said, talking about the gun violence in the city.

“Anything could have, you know, happened,” McGee said, feeling lucky she avoided the incident. “Bullets don’t have no eyes.” 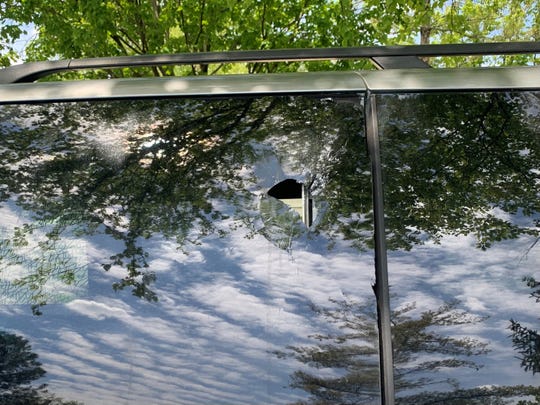 A resident said he found a bullet hole on his van on Saturday, May 15, the day after a fatal police shooting took place at Autumn Trails Apartments.

She pointed out a van near her house with a bullet hole in the backseat window. The owner of the vehicle said he didn’t come home until late Friday evening; so when he woke up Saturday morning, he said he surprised to see the damage. While inspecting the van, he told someone over the phone, “My window is shattered from a bullet hole.”

“I’m really scared,” said Linda McFarland. She leaves her car with her keys in her hand, she says, so she can get inside her apartment faster. “But it’s bad all over,” she says. McFarland returned home Friday about 6:30 p.m., so she couldn’t enter her apartment complex. She waited for a few hours like other residents, she said, in a nearby parking lot.

“I’d never seen so many police cars at one location. I’m like, it had to be pretty bad,” McFarland said. She thought to herself, ” ‘Oh my god, I hope everything is okay, you know, is my place okay? Is everybody okay?’ ”

She still couldn’t get into the apartment complex at 10 p.m., so she decided to stay in a hotel. While coming home Saturday morning, she “just prayed everything was okay.”

The apartment complex has a lot of older citizens, multiple residents told IndyStar, but there are some young people as well. McGee says she often cooks dinner for her neighbors and invites her grandchildren over to play on the weekends. Even if people don’t know each other personally, they’ll sometimes recognize each other and wave or say hello.

The man who died Friday hasn’t been identified. A family member spoke to IndyStar Saturday and confirmed he had previously expressed thoughts of self-harm, but the family member had never seen his relative “like this” before. He said the relative wasn’t staying with him in his apartment at the time of the incident. IMPD said it will launch criminal and administrative investigations into the shooting.

Neighbors also reflected on the bigger issues brought to light this weekend. They’re themes that come up often in Indianapolis and around the country, but rarely do they enter your own neighborhood.

More: How mental health detentions, like one used on FedEx shooter in 2020, work in Indianapolis

Crowdus, an army veteran, said he hopes for gun reform and better political leadership, but he also said “it’s up to the people to change their lifestyle.”

“Too many people got guns that shouldn’t have guns,” Crowdus said.

“You shouldn’t feel unsafe in your own home,” McGee said. Her daughter wants her to move to a different area, she says; when her grandchildren leave the house to play, she asks them to always lock the door.

“Hopefully next time something like this happens, you know, we can get somebody help,” Goodman said, “before it comes down to death.”

If you are struggling, help is available. Contact the National Suicide Hotline any time at 800-273-8255.