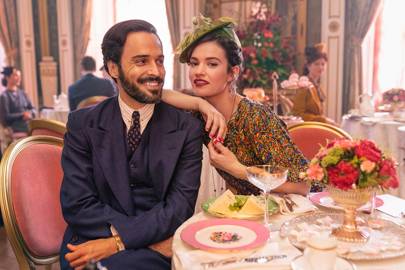 Emily Mortimer’s effervescent television adaptation of Nancy Mitford’s beloved novel, The Pursuit of Love, has been lighting up our screens for three weeks this Sunday. Following the tumultuous love life of its heroine, Linda Radlett, played with charisma and charm by Lily James, it has seen the actress entering into two relationships with rather unsuitable suitors.

Who are the characters in The Pursuit of Love based on?

The first episode ends with Linda marrying Tony Kroesig, played by Freddie Fox, who is all dashing Teutonic glamour at first glance, before transforming into a thoroughly dull bore all too soon in episode two. After this disastrous union, she bolts at the first opportunity with Tony’s exact opposite, politically at least, Christian Talbot, a very serious Communist.

Enter: Fabrice de Sauveterre, a dashing French Duke whose bad boy reputation proceeds him (Lord Merlin, of course, is an acquaintance, and even The Bolter is aware of his charms). The end of episode two sees the mysterious and handsome Frenchman whisking Linda to the comfort and safety of a hotel following a comical tantrum on the platform at Gare du Nord, with the final episode promising the kind of grand love affair Linda has always wanted.

Emily Beecham: Meet the flame-haired actress lighting up our screens in ‘The Pursuit of Love’

Inspired by Nancy Mitford’s real life lover for the last decades of her life, the Parisian politician Gaston Palewski, the Duc is an altogether more flattering portrait than his real life counterpart. An idealised version, if you will. While the Duc is clearly (spoiler alert) devoted to Linda, Palewski was better known for his wandering eye. In one of the more damning events of his life, he married another woman shortly after Mitford was diagnosed with cancer, and when they were very much still a couple.

If Fabrice looks familiar to you, that’s because 40-year-old French-Moroccan actor Assaad Bouab plays man-bun-wearing dating app entrepreneur Hicham Janowski in French comedy series, Call My Agent!. Or perhaps you know him from last year’s Netflix hit, Messiah, about a Christ-like figure who emerges from the Middle East claiming to be the saviour.

If you’d like to see more of Bouab after Sunday’s episode, don’t fret, as he’s about to be everywhere. He’s due to appear in Inventing Anna, the streaming site’s new documentary about New York’s fake heiress Anna Delvey, as well as an upcoming season of the BBC’s Birmingham-based gangster show, Peaky Blinders. Oh la la!