In light of LGBTQ Pride month, celebrated annually in June, meet some LGBTQ and queer-identifying business owners based in Central Indiana and beyond.

Gender pronouns are listed for each business owner, a practice that is becoming increasingly common in social and professional settings to encourage inclusivity of all gender identities. 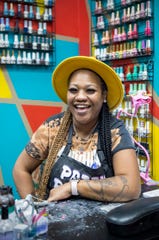 Patrice Finley (she/her) is a nail technician and owner of Patty Paints in Indianapolis.

Finley said clients flock to her personality, and being LGBTQ is just another piece of that.

“I hid that part of me when I was younger, but when I came of age, I was just like, never again. It’s not the first thing I mention to a lot of people, of course, but I don’t hide who I am, that is a part of me,” Finley said. “You’re not sitting in my chair because of my sexuality, you’re sitting in my chair because of my art. My clients also love my girlfriend. She’s always around,” Finley said, smiling.

Jessica Bussert (she/her) is the founder and CEO of Wave Therapeutics, a health technology startup based in Nashville, Indiana, that specializes in devices that prevent pressure injuries.

Bussert was a longtime global computer consultant who lost her career due to discrimination when she came out as transgender 16 years ago. She eventually became a travel nurse, which inspired her current business endeavor.

“The trans community is statistically unemployed or under-employed, all across the world. Those of us that have jobs don’t work anywhere near our capability, and that’s all because of discrimination. I’ve experienced that again and again,” Bussert said. “So creating Wave Therapeutics is not only an opportunity to help protect people from bed sores, but it’s to help ensure that I and my family and other members in our community have one more opportunity at a discrimination-free employment class.” 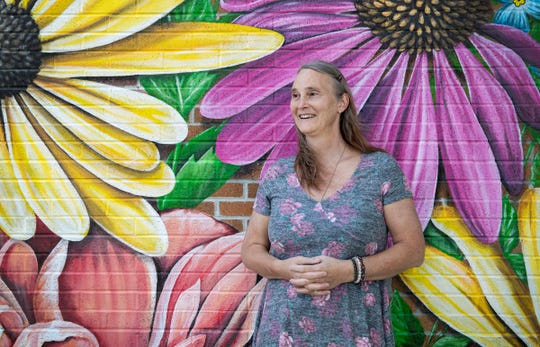 To Bussert, Pride is about celebrating accomplishments of the past and those to come.

Lei Bretón works on a piece at Curvy Custom Bride in SoBro.

Lei Bretón (she/they) is an inclusive fashion designer and owner of Curvy Custom Bride in SoBro. Bretón first began the business with curvy bodies in mind but works with clients of all body types and gender identities, many of whom are LGBTQ.

“There’s so much of the wedding industry that is catered to young, thin, white, straight, cis women, and so I wanted to go as far away from that as possible,” Bretón said. “Just last year I started doing suits. I did one suit, it kind of blew up a little bit because it was awesome, and now the majority of my clients this year are suits.”

Bretón prides themself on original designs that cater uniquely to each client, especially clients who are non-binary, an umbrella term for people whose gender identity does not align with the binary of man or woman.

“I want to make sure that other non-binary people can see inspiration from a non-binary wedding, as opposed to, ‘well, I can make this work,’ and they’re really just creating looks out of thin air,” Bretón said. 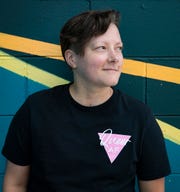 Nash Ward, of Award Creative Group, outside of Bovaconti Coffee in Fountain Square.

Nash Ward (they/them) is a graphic designer, visual artist and owner of Award Creative Group, based in Indianapolis. Running an independent business gives Ward the freedom to embrace their identity and partner with people and organizations whose values align with their own.

“When I’m working for myself and doing things for myself, I want to help those people who are either minorities or small businesses, new businesses, just like myself,” Ward said. “It just kind of it motivates me to raise awareness in our community.”

As someone who began to accept and embrace their identity relatively recently, June is special to Ward.

“I’m still kind of new to this whole pride thing. I’ve only been to a handful of Prides in my life so I still get really excited about it. It’s just a big party and all the colors and all the flamboyancy, I just love it,” Ward said. 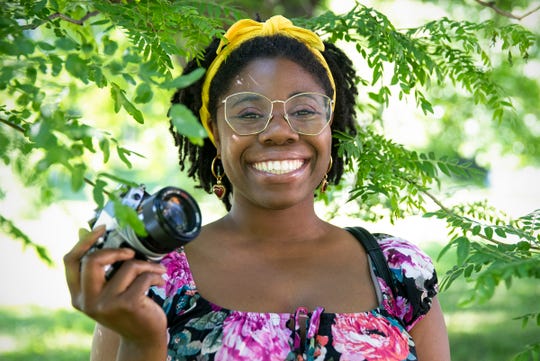 Maxine Wallace (she/her) is a freelance photographer based in Indianapolis and lead photographer for Indy Pride.

“I love highlighting the beauty of our queer community here, and I’m really proud to be a part of it. Almost all of my collaborators also happened to be either queer or other people of color, so being able to come together and create something beautiful for our community, I love it,” Wallace said.

“When June comes around, it almost feels like the community kind of has this sigh of relief for a minute. And I love Pride for that, that we get this time to be ourselves and to really celebrate, because we spend so much time hiding. Even now, I have friends who tell me that there’s certain parts of Indiana that they do not feel comfortable holding their partner’s hand, and I hate that.” 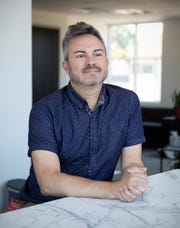 Joseph Lese is principal architect and owner of Progess Studio.

Joseph Lese (he/him) is an architect and owner of Progress Studio, an architecture and design firm based near downtown Indianapolis. Lese has prioritized diversity, authenticity and expression in his workplace.

“I think about when I was growing up, and this was the mid-90s and early-90s and there was not social media, there was not really quite the social movement that there is now. I wish I could go back to my former self and let that individual know, ‘hey, whatever you’re going through, it’s going to be okay and you’ll surprise yourself along the way,'” Lese said.

“For me, Pride month is a good way to celebrate yourself, as well as all the others that are in the community, and recognize that it’s just a full spectrum of beautiful people and we all come from different backgrounds and different experiences and they’re all to be celebrated.”

Attorney Kate Flood in her office at Flood Family Law.

Kate Flood (she/her) is a family law attorney and owner of Flood Family Law in Broad Ripple. She graduated from IU’s McKinney School of Law in 2012 and opened the firm in 2013.

“When I was in law school, I did not know a single other lesbian law student or lesbian attorney. There was no visibility. And I remember feeling really kind of isolated because of that,” Flood said. “So when I was in law school, I made the decision to be as out as possible, because I didn’t want any other newer lawyers or law students to feel the same way that I did.”

Flood said the firm frequently works on same-sex divorce cases and same-sex second-parent adoptions. The firm also helps clients in need of legal name and gender marker changes and will work those cases for free if a client is unable to pay.

Adriana Perez Mayo (she/her) and Luis Perez Mayo Perez (he/him) are a sibling duo who recently launched Mayo Services, an Indianapolis employment agency. Luis and Adriana are both part of the LGBTQ community and hope inclusivity will be part of their business message.

“I think it’s very important to be open about it because it brings confidence to people, so anyone is welcome here,” Luis said. “We don’t judge or put a label on anyone.”

Adriana and Luis are proud of their intersectional identities.

“It’s our month,” Adriana said of June, LGBTQ Pride month. “We are proud of this month.”

Jabari Haakim (he/they) is a photographer and owner of JM Photography.

“When I got into high school I started to have a big interest in photography. My stepdad had a lot of cameras around so I was always playing with lenses, playing with the film cameras, and then I got into the digital cameras and it just went from there,” Haakim said. “I think it’s important to be out and show people that you can be successful and be queer at the same time.” 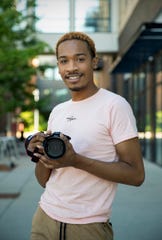 Jabari Haakim is an Indianapolis photographer.

Haakim says Pride celebrations helped them find a welcoming community of like-minded people that has shaped they are today.

“To me, Pride month is about living in your truth, being unapologetically you. For me it took a long time for me to actually be able to live in my truth and be happy and be proud of who I am because my family wasn’t accepting of me being gay for a long time,” Haakim said.

“I really feel like Pride Month is about celebrating who you are and having faith in who you are and being proud of that, and standing on that and not letting anybody take that away from you.”

Jack Shepler (he/him) is the founder and CEO of Ayokay, a marketing and web design agency in Indianapolis. Shepler is also the festival entertainment director for Indy Pride.

Shepler said he wasn’t as open about his identity when he first began the business 10 years ago, but that has changed over the years. Ayokay is now certified with the National LGBT Chamber of Commerce (NGLCC). 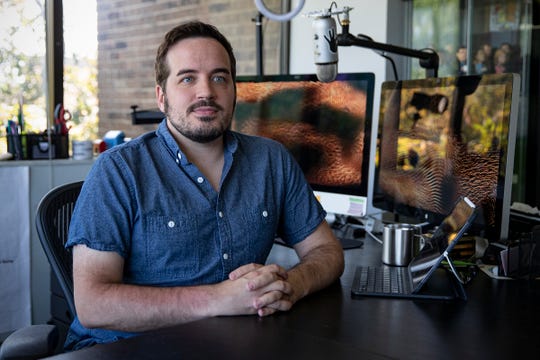 Jack Shepler at Ayokay in Indianapolis.

“Pride Month to me means the busiest month of the year, because this is my 10th year volunteering for Indy Pride. I’m the entertainment director, I used to be on the board, I’ve just been very involved for a long time, so June is usually chaotic for me,” Shepler said, laughing.

“But the concept of Pride and why we have a Pride, it’s really just about living your true self and not hiding who you are.” 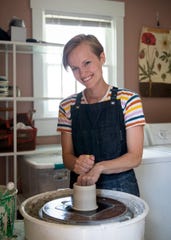 Felissa King (she/her) is a potter and owner of Felissa Joy Studio, which she runs from her east-side home. She plans to open a community studio later this year, Yellow Door Ceramic Studio, with business partner Amanda Pennington.

“We hope to be a very inclusive, safe space for people. Partially because, I mean, working in clay is an international, multi-dimensional practice, but typically in the U.S. it tends to be white men who are very successful with it,” King said.

“And there are definitely queer artists, as well, I just think it’s important to designate that it’s a safe space for that, especially since it can have therapeutic effects for people and benefits.”

Jenna Phillips (she/her) is a realtor affiliated with Scotts Estates and is also building her own brand, Pride and Property Real Estate, based in Central Indiana.

“When me and my wife got rid of our house, we felt that there was a lack of representation. We didn’t feel like our needs were heard. I didn’t feel like I was actively involved because I was not on the home loan, so it was like my opinion really didn’t matter,” Phillips said. 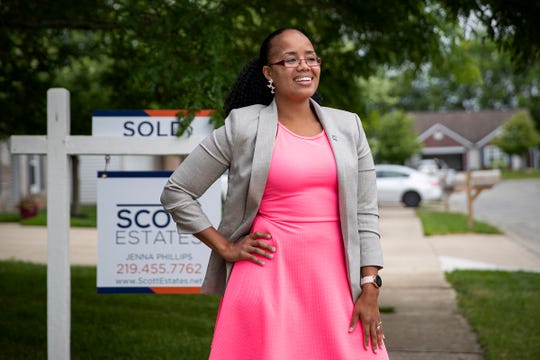 Jenna Phillips at an east-side home she recently sold.

“So when I became a real estate agent, I made sure that that is what I stood on — everyone’s included in the transaction, no matter if your name is on the loan or not. I didn’t want the LGBTQ to be afraid to buy a home, because that happens a lot with LGBTQ homeownership due to discrimination in Indiana, not having a law against discrimination for LGBTQ for homeownership.”

Phillips said her identity has become her niche.

“I represent three strong categories, being a woman, being African American, being LGBTQ. So I really want to be positive representation.”