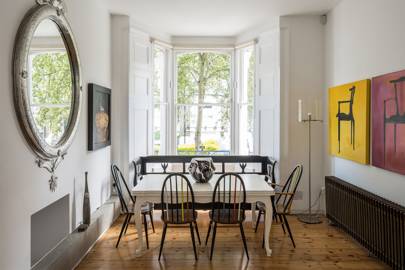 Live in the former £2.5 million townhouse of Alexander McQueen

A grand townhouse on Highbury’s Aberdeen Road that once belonged to the legendary fashion designer, Alexander McQueen, has hit the market with an asking price of £2.5 million. The designer lived at the four-bedroom residence at the heights of his fashion powers, between 2001 and 2005.

McQueen, who tragically took his own life aged 40 in 2010, hit the fashion scene in 1996 as the chief designer at Givenchy. The Victorian house was freshly designed by Azman Owens Architects, and Elle Home once praised their work, writing: ‘The beauty of Azman Owens’ design is that it looks like a Victorian house converted into a tranquil modern space, as opposed to pretending to be something it isn’t.’ It was a former resident, the hair stylist Guido Palau, who commissioned the architectural interventions.

Live a little in the mansion where King George III let his hair down post-coronation, Albury Park

McQueen fell in love with the changes to the building brought about by Palau (both of whom were featured in British Fashion Council’s ‘25 Most Powerful People in the Fashion Industry’); with its Victorian proportions eschewed in favour of what The Modern House (who is selling the property) describe as its ‘sleek, expansive, minimalist spaces’ (adapted in more recent years again by Gullaksen Architects).

The four-storey house is located on a peaceful, tree-lined street that runs between Highbury and Canonbury. The neighbouring Victorian villas look very similar – but this house has a refreshingly modern interior. It’s a feast of pine floorboards and pared-back minimalism. A green plaque proudly alerts passers-by and visitors to its famous former resident, McQueen. It also has a large, private garden abounding with an ‘almost sculptural fig tree’ and ivy clad garden walls.