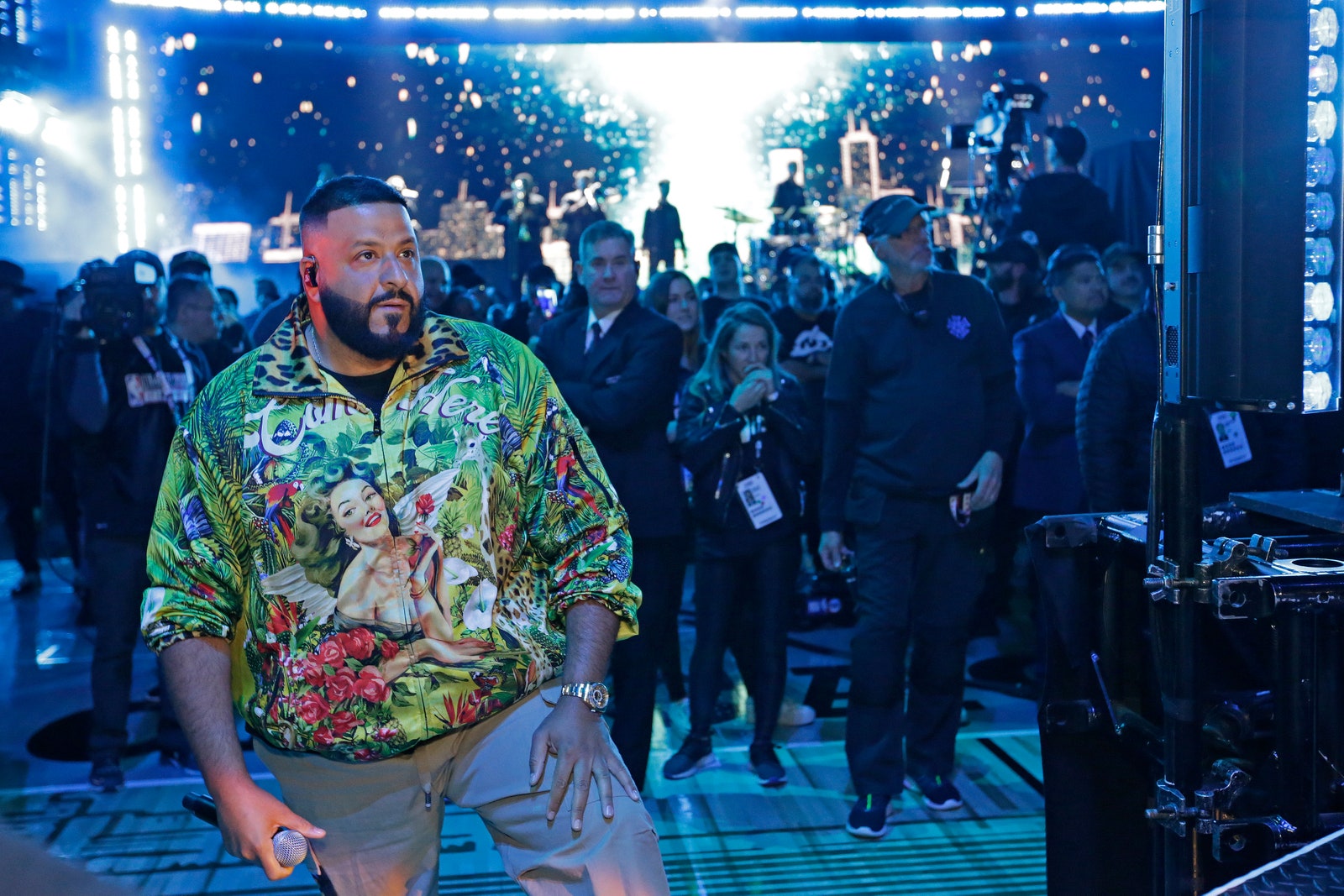 It is hard to pinpoint exactly when I began to love DJ Khaled, mostly because his music videos all blend into one. His looks also follow the same indiscernible, but still out-of-control, theme: a silk, printed camp shirt that reminds me of really expensive, busy upholstery, endless bathrobes and a constant rotation of tracksuits. Recently, I fell back in love with the producer and musician when he was promoting his new album Khaled Khaled. For the album cover, he wore a relaxed, full blue look consisting of a silky shirt and a pair of loose pants—the sort of blue that you see in a sugary tropical drink. In this excessive outfit, Khaled looked great.

Khaled’s personal style really shines in his music videos. My favorite moment—which happens in most of them—is when Khaled looks out into the distance pensively, dressed to the nines. In “I’m On One”, he gazes out into a cityscape while wearing a bridal white tracksuit and sipping on a nuclear green 4Loko (Drake raps in the background). In “Do You Mind”, he plays piano with his hands decked out in mortgage worth’s of gold. He’s wearing a blurred-out Goyard-print shirt, and two Goyard leather duffels on top of a white piano.

But the producer’s style wasn’t always so wild. In the early 2000s, he wore mostly oversized polos and white T-shirts. It wasn’t really until 2017, with his release of the album Grateful, that we started to see Khaled’s look truly bloom. Coincidentally, it was when his name was truly everywhere. In the music video “Wild Thoughts” with Rihanna and Bryson Tiller, we see the full-bearded Khaled in a floral print silk bomber jacket move his arms to the beat. In “I’m the One,” he wears a groovy shirt with a pair of simple jeans. This is just the beginning of Khaled’s larger-than-life look. Since then, the colors have only gotten brighter and the patterns more wild.

Khaled’s look has to be bright to match his personality and music. We hear him say “We the Best” or “DJ Khaled!” in the beginning of a song. Sometimes he goes on a tangent and will give us a trail of affirmations in the beginning of his videos, which are iconic in his own right. It wouldn’t make sense if the man behind those exclamations were a minimalist. But more than that, he’s a producer, which is typically a more behind-the-scenes job than a musician. In order to make a splash in the industry, he has to be seen and make an impression. That’s where those retina-searing monochromatic looks, those wildly printed silk shirts, and manic Valentino hoodies with multicolored camo come in.

Khaled’s style is like him: He’s loud on the verge of being annoying, but then you remember it’s tender and genuine at the end of the day. Khaled can be best summed up in an Instagram video in which he films himself taking his wife on a shopping spree at Bergdorf’s and he keeps screaming “honey, buy the whole store out”. His wife, the mother of his two children, gets visibly annoyed. But by the end of the video, he tells her how hard he works and they are back to canoodling again. Khaled grows on you, as does his look. Plus, you know it comes from a good place. With his aesthetic, Khaled isn’t whispering sweet nothings, but rather yelling “major key alerts.” And we can’t wait to hear more.