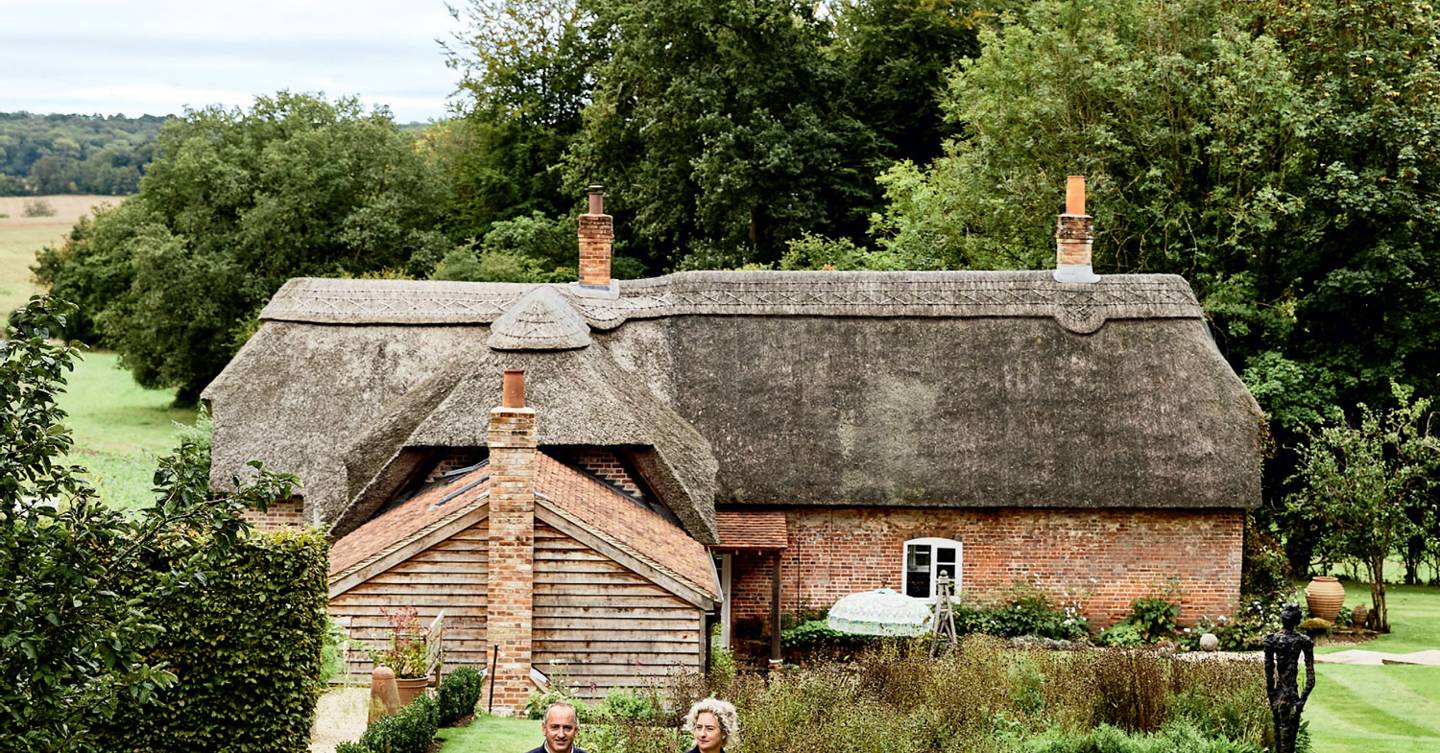 The rough track that twists and turns through Savernake Forest to Travers and Katie Nettleton’s house is the stuff of fairy tales: a little bit Little Red Riding Hood and a little bit Hansel and Gretel. Except there is no big bad wolf (unless you count Herbert the dachshund) and the house – while storybook perfect with its welcoming demeanour and roof of heavy thatch – is not made of gingerbread.

Travers is a forest boy through and through, who grew up in this neck of the woods and bought from his father, some 30 years ago, the two dilapidated foresters’ cottages where he had played as a child. These cottages became his home in 1993 when he returned from a stint as a jackaroo in Australia, and he was joined shortly afterwards by Katie, now his wife, whom he had met at a party in Adelaide.

The two of them united and modernised the cottages – the oldest parts of which date back to the 17th century – and added to them as their family grew (they have three teenage daughters). At the same time, they have also fashioned a glorious garden on the edge of the forest, with an unblemished vista of Wiltshire fields and hedgerows. That Katie is a trained architect goes some way to explaining how the house hangs together so seamlessly and how Barrs Yard – the Nettletons’ joint project – has evolved so successfully over the course of the past 16 years as an inviting destination-shopping development. But more on that subject later.

The home of the founders of iconic London shop Jamb

First, a step back to Travers’ roots. ‘I’ve always been in the antiques world,’ he says, recalling time spent selling antique billiard tables with his father. ‘And gardening has been a passion, too,’ he adds, explaining the migration from interior to exterior antiques and how he mastered, over the years, ‘the art of garden art’. This has become the nub of his business, Garden Art Plus, for which he is recognised as one of the country’s top experts in the field.

A gentle amble round his garden reveals an Italian Renaissance marble merman, casually propped up outside the front door; a pair of English Regency putti, carved in Portland stone to represent summer and autumn (Travers is still trying to track down winter and spring); two early-19th-century Coade stone lions, which peep from under a climbing rose; and plenty more besides. But for a broader sweep of his collection, it is necessary to follow the path back through the forest to the busy A4 as it passes through Hungerford.

Those familiar with the area – even those who might just have flashed past in a car – may well have noticed a large garden antiques centre right on the roadside. This is Barrs Yard, a two-acre former salvage and timber yard that Travers had had his eye on for some time. He rented there for a few years and finally bought the freehold in 2013, with grand plans to develop the site and create what he refers to as ‘a community of like-minded retailers’.

At present, the community numbers seven businesses – a florist’s, an art gallery, a fashion outlet, a wine shop, a vintage furniture shop, a café and the head office of Garden Art Plus, where Travers and Katie spend the majority of their time. Outside, a vast array of statues and urns, columns, fountains, troughs, sun dials, bird baths and every kind of decorative garden ornament or structure – be it antique or modern – lies around in apparent abandonment. Do not be fooled, however: Travers knows every item’s date, provenance and price.

Most of Garden Art Plus’s stock is sourced privately. Such is Travers’ reputation that people contact him out of the blue with antiques to sell. Sometimes they just turn up, such as the man in full tennis kit who arrived while we were eating lunch in the showroom and deposited, for valuation, a 19th-century stone urn he had discovered that morning under some ivy in his garden.

Clients, too, are a mixed bag, from the humble passer-by to celebrities and royalty hailing from both the UK and overseas. A regular exhibitor at the RHS Chelsea Flower Show, Travers often works in conjunction with garden designers, sourcing specific antiques for specific sites. And his list of prestigious commercial clients is growing apace, among them Annabel’s in London, Lime Wood hotel in Hampshire, The Newt in Somerset and The Pig hotel group. For The Pig’s latest venture at Harlyn Bay in Cornwall, in addition to providing much of the garden art, Travers and Katie designed a set of outdoor tables with antique Egyptian tiled tops for the hotel’s Lobster Shed restaurant. These form part of the couple’s wider range of bespoke garden furniture – tables, benches and planters in the main – much of it made from solid oak.

The striking contemporary house of the couple behind antiques emporium Guinevere

As if Barrs Yard was not enough to keep them occupied and since Travers could not quite let go of his early interest in interiors, in 2019 the Nettletons bought the Blanchard Collective, a one-stop, warehouse-style showroom in the nearby village of Froxfield. Partnering them in the business is Hugo Scott Russell, a former employee at Garden Art Plus. He oversees the Collective, where about 20 different dealers, including the likes of Ramsey Krause and Lynda Franklin Interiors, display antiques, furniture, lighting and decorative collectables all under one roof. It is a veritable treasure trove and there is also a handful of tempting garden pieces on show outside, which lure visitors on to Barrs Yard.

There are further schemes afoot. ‘We’ve always wanted the site to evolve,’ says Katie who, having overseen the architectural design and development of the yard and the creation of the five-bay, double-height building that houses the majority of the retail spaces, now has a new project. Planning permission was granted originally for 22 shops. ‘We don’t want to max out the site, though,’ she says cautiously, unfurling elaborate plans on the office table. ‘So, we’ll probably just continue with another five or six.’ When I ask who is likely to fill these shops, she responds with a wry smile that there is a queue of retailers waiting to join the Barrs Yard gang. She has no intention of letting anyone in unless they fit the brief of being an independent operator with an artisanal bent. ‘It would be nice to have a restaurant or a wine bar,’ she says, eyeing up an old, dark blue double-decker bus parked in the yard. ‘Too bad,’ says Travers. ‘I already have a buyer for that.’

These are busy times for the Nettletons, despite all the pandemic might have thrown in their way. There is always work to be done and deals to be made, not just buying and selling but renting out garden antiques for private events and film sets. Travers, who rises at 4am each day, primarily so he has time to work on his own garden, never misses a moment for fishing. His fly rod is always with him and, happily, the River Kennet, one of the best trout streams in the UK, flows just behind Barrs Yard. Even a 30-minute lull in proceedings – or the end of a summer’s day – will see him down on the river bank, dogs in tow. Then it is home with Katie to the forest, down the twisty-turny track through the trees and straight back into the fairy tale.