A Bloomfield woman will plead guilty this week for her role in the U.S. Capitol riot after appealing to the court that she has learned from her participation from movies and books such as “Schindler’s List” and “Just Mercy.”

Anna Morgan-Lloyd has agreed to plead guilty to one of her pending federal charges in the Jan. 6 insurrection in exchange for three years probation, $500 in restitution and community service.

The 49-year-old attended what initially began as a rally with her friend Dona Sue Bissey — also federally charged in the riot. Bissey, whose case is still pending, is scheduled to appear in court July 19.

In a letter to the judge, Morgan-Lloyd apologized for entering the U.S. Capitol and said she feels “ashamed” about how the march that day turned violent. She attached movie and book reports to her letter, summarizing “Schindler’s List” and “Just Mercy.” Her attorney recommended them, she said, to learn “what life is like for others in our country.”

“I’ve learned that even though we live in a wonderful country things still need to improve,” Morgan-Lloyd wrote. “People of all colors should feel as safe as I do to walk down the street.”

In “Schindler’s List,” protagonist Oskar Schindler diverted hundreds of Jews from sure death by employing them in his factory in Nazi-occupied Poland. In “Just Mercy,” Bryan Stevenson recalls his career representing disadvantaged clients and establishing the Equal Justice Initiative in 1989. 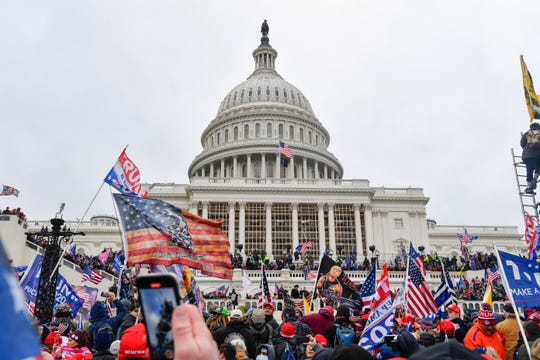 Rioters attack the U.S. Capitol on Jan. 6 as Congress meets to formally ratify Joe Biden as the winner of the 2020 presidential election.

Morgan-Lloyd’s attorney in court records said that the two have had “many political and ethical discussions,” to learn about government policy toward people of color and about the “responsibility of an individual when confronting wrong.”

Bissey and Morgan-Lloyd referred to Jan. 6 as the “most exciting day” of their lives in Facebook posts, tagging one photo inside the Capitol building. The FBI arrested the two women in late February, making them among six Hoosiers criminally charged in the aftermath of the insurrection.

Court records show the Acting U.S. Attorney has agreed to the plea, calling Morgan-Lloyd’s participation a serious violation of the law, but noted she did not engage in physical violence or destroy government property.

“To be clear, what the Defendant initially described as “the most exciting day of (her) life” was, in fact, a tragic day for our nation — a day of riotous violence, collective destruction, and criminal conduct by a frenzied and lawless mob,” Acting U.S. Attorney Channing Phillips wrote in court records.

The U.S. listed Morgan-Lloyd’s apparent remorse, no prior criminal history and cooperation with law enforcement after her arrest as some of the reasons for the government’s acceptance of the plea agreement.

In her letter to the court, Morgan-Lloyd said she later realized that if she removed herself from the crowd, the violent participants “may have lost the nerve to do what they did.”

“For that I am sorry and take responsibility,” Morgan-Lloyd wrote.

Her sentencing is scheduled for 2:30 p.m. Wednesday.