Indianapolis agreed to pay $2.15 million to Gerald Cole to settle a lawsuit stemming from the October 2016 incident with Officer James Perry. Indianapolis Star

A man whose girlfriend and unborn child were fatally struck by an Indianapolis police patrol car near an I-465 onramp last year is suing the driving officer for damages in federal court.

Marcus Lewis Jr. filed the lawsuit in Southern District of Indiana court against Indianapolis officer Jonathan Henderson and the City of Indianapolis just days after the one-year anniversary of the tragedy.

In the lawsuit, Lewis Jr.’s lawyers allege that Henderson was driving 33 mph over the speed limit and made an illegal lane change moments before he hit 23-year-old Ashlynn Lisby.

“If a civilian drove this recklessly and killed two people, that person would likely face criminal charges,” attorney Stephen Wagner said in a news release. “That person would also lose his or her job if driving a vehicle for an employer at the time of the accident.”

30 years in prison: Drunken driver who killed 2 in crash at 38th and Keystone in 2019 sentenced

The complaint alleges that Henderson was never disciplined for the fatal incident. When asked for comment, IMPD referred IndyStar to the City of Indianapolis’ Office of Corporation Counsel, which said it does not comment on pending litigation.

According to the complaint, Lewis Jr. and Lisby were walking north on the shoulder of Harding Street just south of an onramp to the I-465 East the evening of May 6, 2020. They were heading to their motel room.

Henderson, a 22-year veteran of the force at the time, was in uniform and driving north on Harding Street. He was in a police vehicle and on his way to roll call. 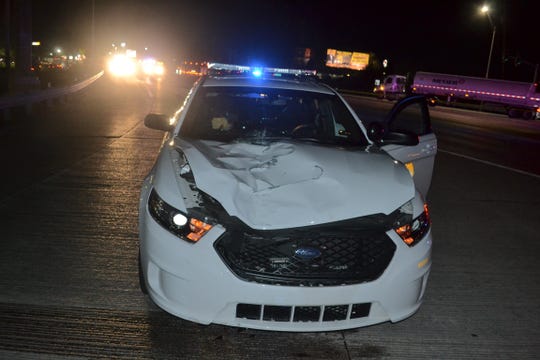 A lawsuit has been filed a year after a fatal crash involving an Indianapolis police officer that killed 23-year-old Ashlynn Lisby and her unborn child.

Lewis Jr.’s lawyers say black box data obtained from the crash shows he accelerated to 78 mph and made an illegal lane shift over a solid white line as he positioned his vehicle into the right turn lane.

He checked his rearview mirror as he prepared to turn onto the I-465 East, and his car drifted over the right fog line. That’s when he struck Lisby, launching her across the asphalt. Her body left an elliptical dent in the hood of his car and cracked his windshield.

“Marcus heard the impact, witnessed the immediate aftermath of this horrible accident, and tried to help Ashlynn,” the complaint reads. “Marcus still has nightmares about it more than a year later.”

Lisby was transported by ambulance to Eskenazi Hospital, where she was pronounced dead. Her child, Marcus Lewis III, was born alive through an emergency cesarean section; he died moments later.

Lewis Jr.’s lawyers allege that police attempted to cover up the incident. They said IMPD prepared a crash report that lists the primary cause of the accident as the “pedestrian’s action.”

The crash report also allegedly states none of Henderson’s actions played a contributing role in the accident.

“The accident report does not mention that Henderson was speeding, made an illegal lane shift, and was driving partially on the shoulder of Harding Street when he struck Ashlynn,” the complaint reads.

Lewis Jr. is asking the court to award compensatory damages for the death of his child, and punitive damages against Henderson.

At the time of the accident IMPD said Henderson called for backup and rendered first aid to Lisby. They also said he collaborated with investigators and submitted to a blood draw to rule out impaired driving as a factor.

In May 2020 Lisby’s family set up an estate to begin a separate wrongful death lawsuit, court records show.

Call IndyStar courts reporter Johnny Magdaleno at 317-273-3188 or email him at jmagdaleno@gannett.com. Follow him on Twitter @IndyStarJohnny