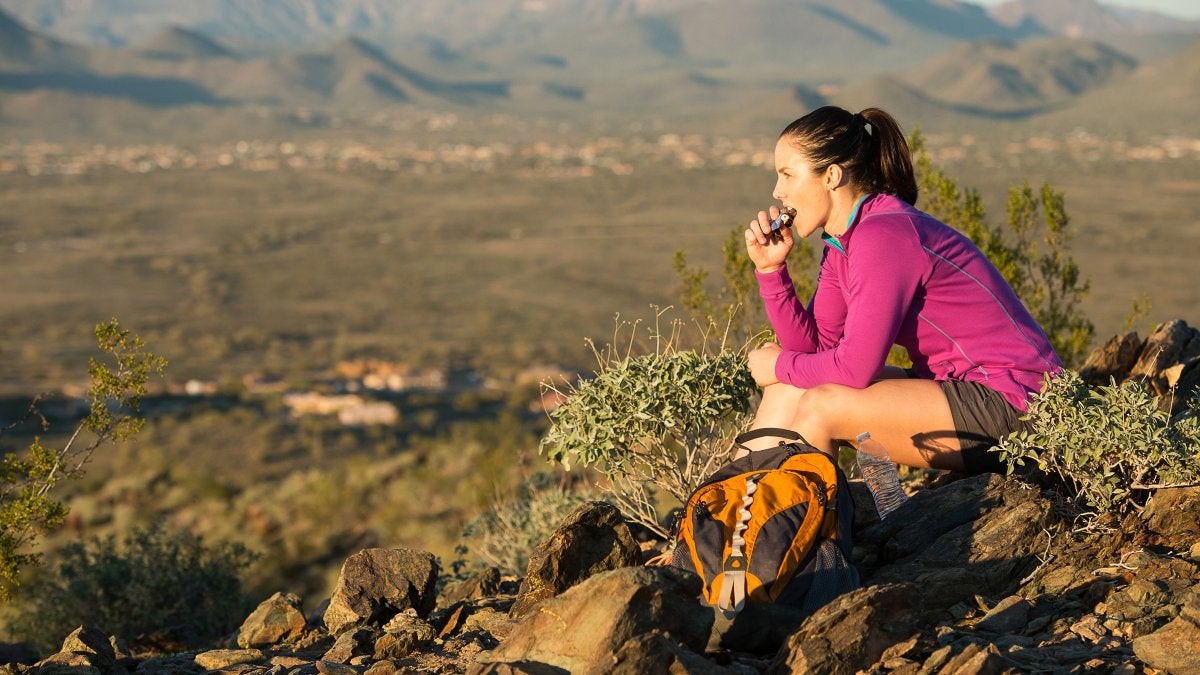 I Wrote an Equation to Find the Perfect Adventure Snack

I’ve had a trip to climb Denali on the horizon for two winters now, which means I’ve had more than enough time to prep. Planning the food you’re going to eat is one of the most tedious and critical tasks on a long expedition—and probably one of the most important when nearly every day of that month will be spent exerting massive amounts of energy. Even something as seemingly small as snack choice can take, in my case, almost two years to perfect. It all started with an experiment in the fall of 2019: How many different adventure fuel options could I try before heading to Alaska? That experiment necessitated some organization, so I began logging every snack I’d taken hiking, climbing, skiing, backpacking, and more into a massive spreadsheet I called the Snack Tracker 1000. Along with the name and flavor of the product and a rating based on how much I enjoyed eating it, I would input details from the wrapper: a pile of nutrition facts and the weight of the product. And then I let Google Sheets do its best Jonah-Hill-in-Moneyball impression to spit out a final Snack Value Rating. Here’s what I learned.

The Starting Point: Breakfast and Dinner

For most trips, including my Denali expedition, breakfast and dinner are fairly predictable. Ideally we’re eating each at camp, which means these meals can be a little more traditional. Our meals—custom designed and dehydrated by Nutrition By Julie—are set up to have everything we need. But throughout the day, while we’re moving and don’t have access to a stove or kitchen, it’s more efficient to throw out the idea of “lunch” in favor of taking in smaller numbers of calories consistently interspersed between our two big meals. That’s where snacks come in.

What Is the Ideal Snack?

Calories are the obvious place to start when it comes to planning your food for a big mission. Everyone has different caloric needs (one way to calculate yours is by using the MET method)—we decided to shoot for approximately 3,000 calories per day. Our breakfasts and dinners took care of between 1,000 and 1,200 calories each, which meant we had roughly an additional 1,000 calories to slowly take in throughout the day.

Rebecca Dent, a dietitian for the mountain athlete training program company Uphill Athlete, recommends refueling every 60 to 90 minutes throughout an active day, which is somewhere in the ballpark of 200 to 300 calories at a time—much more than that, and your body will have a hard time processing while you keep moving.

In terms of the breakdown of those calories, Dent recommends a good mix of both carbohydrates and proteins throughout the day: roughly in a four-to-one ratio. While you’re active, your body will need carbohydrates (and burn them more quickly), but introducing proteins throughout the day, rather than simply resupplying them at the end of the day, will help keep your longer-term energy stores up.

On an expedition, of course, another critical factor in snacking is how much of these things—calories, carbs, and proteins—you get for the weight you need to carry. For obvious reasons, the more nutrients packed into a set weight, the less you’re going to need to carry, and the more bang you’ll get for your backpack’s buck.

But at the end of the day, according to Dent, “The most important thing is that when you get out there, you have foods that you’re going to want to eat.” Mixed with vigorous exercise, cold, and elevation, not everything is going to be palatable. “At home, everything tastes good,” Dent said, so she recommends trying all your options out in the field before a big trip.

How to Calculate It

Step one in using the Snack Tracker 1000 involves trying the food and rating its favorability: How much do I like eating it? Then I input the nutrition facts into their own columns (per package, rather than per serving, to make the math easier), as well as the product’s weight. Here’s where the math starts: dividing the number of calories by the weight gives a relatively simple calories per ounce—the snack’s weight efficiency. The higher the number, the more energy you get for what you have to carry. (For fun, you can do the same math with carbs and proteins to see which items are better at packing each of those nutrients into their size.)

From here, my goal was to see which options best accomplished two things—got as close as possible to that four-to-one ratio, and packed them as efficiently as possible—with the hope that by focusing on those that did the best of each, I could optimize both my nutrition intake and pack weight. I used three formulas to do this:

This spits out a score for each snack that rates it on how close it is to that ideal carbs to protein ratio. A score of zero is a perfect four-to-one. (I used an absolute value fuction here to make sure the value is always positive, to make for easier ranking.)

This formula is the same as the calorie efficiency I already calculated, but scaled to roughly match the carb to protein score, and it flips it. The lower the number, the more calorie-dense it is.

Finally, this Mystery Formula combines the two scores to make the ultimate Snack Value Rating, evaluating how well the foods do both things.

Out of the almost 70 snacks I tried, the top choices according to the Mystery Formula are a mix of classic standbys and surprising winners. At the very top of the list are products like Clif’s Nut Butter Bars and Cubes, thanks to a particularly impressive Nutrient Score: both have between 3.7 and 4.6 carbs for every gram of protein. But they’re equally efficient packers.

Also high on the list are various different chocolate and candy bars like Snickers and Twix, with a grocery store brand 70 percent cacao bar taking the cake. Chocolate like that is particularly calorie-dense and has enough protein (from dairy, and nuts in the case of a Snickers bar) to score well on its Nutrient Score. While you wouldn’t want your snack budget to consist solely of these sweets (they’re loaded with fast-acting sugars and don’t have a lot of the antioxidants and fibers you also need), Dent says you definitely shouldn’t count them out. “Ultimately, it comes back to do you like it and will you eat it,” she said. And in the case of candy bars, the answer is more often yes, making them a great option, especially for high altitude or during high exertion when other snacks might not go down.

At the bottom of the list are protein-heavy products like jerkys and meat sticks, which score so poorly largely because their overzealous protein content throws their Nutrient Score to the moon. Dent says there’s still a place for them, though. Not only do they add some variety in flavor and texture (making them easier to eat alongside other more homogeneous-textured options), but they can help make up for protein lost in your candy bar selections. Dent suggests pairing them with your carb-heavy snacks: the protein they provide is necessary, but is slower acting and won’t benefit you very quickly.

In the end, the Snack Tracker 1000 will never be the end-all-be-all solution for adventure snacks. Variety—in flavor, texture, and type—is critical to your nutrition over a long endurance activity. But by training an eye toward the right balance of carbs and proteins as well as the weight of each snack, you’re more likely to get everything your body needs, without breaking under your pack weight.

When you buy something using the retail links in our stories, we may earn a small commission. Outside does not accept money for editorial gear reviews. Read more about our policy.