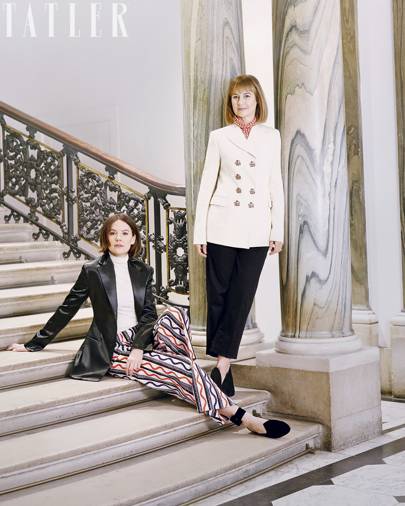 Into its 35th year, the London Original Print Fair has never been more welcome following the cultural drought that was 2020. Museums, galleries and cultural spaces shuttered their doors as the pandemic took hold and everything, from the Louvre to the Uffizi, moved online. It is with the return of annual cultural events, like the London Original Print Fair, that we – the art-hungry public – can breathe a great sigh of relief.

Helen Rosslyn, the fair’s director (and Tatler’s art editor), is palpably enthused when we speak on the phone this week in the lead up to the great reopening. Normally the fair would take place within the gilded, historic – and relatively newly renovated – walls of the Royal Academy. However, given we are only part-way through Boris’s ‘roadmap’ to liberty, the institution is still closed and the fair has been forced to come up with an alternative way to take place.

Helen and her daughter, Alice St Clair, the fair’s assistant director, have successfully made a virtue of the situation. ‘Normally there would be 50 exhibitors in the Royal Academy’s main galleries,’ Helen explains. ‘But this year, because the fair is taking place inside smaller galleries all across London, the number participating has increased to 40 in real life and 75 when you include online.’ It also makes the fair far less London-centric – and global – with the virtual viewing rooms including galleries as far flung as Scotland, Norway, the States and Paris.

Another virtue of this year’s format, is that by going to the individual galleries – dotted in clumps across London – a handful are home to traditional printing presses. Such as Hoxton’s Paupers Press, a fine art and publishing studio, where they carry out etching, lithography and relief printing (while doubling up as a gallery). Paupers is where London art world stars Grayson Perry and Paula Rego’s works get printed – and at the LOPF will showcase the eerie woodland works of James Turrell alongside Sarah Ball’s fantastic sequence of printed portraits.

But – an important question – how best to plan your way around the literal map of galleries? Helen advises pursuers to start in Mayfair and St James’s, the print fair’s beating hub, then branch outwards depending on your artistic appetite. An art seeker on a budget? Head to Shoreditch’s Jealous where you might secure an original print for under £100 (and they are releasing Chris Levine’s glossy red-lipped Kate Moss image). If you’re mad keen on the Japanese style of printmaking, head to St. James’s Hanga Ten, where they’ll be showcasing works by the late lithographer Toko Shinoda and Japanese-style stencil master Yoshitoshi Mori. And if you have a taste for the more wonderfully traditional style of prints, head to Soho institution Andrew Edmunds, set in an 18th century townhouse beneath the Academy Club, one of the proud last bastions of ‘old Soho’. At Edmunds, you’ll find a wealth of 18th and 19th century Hogarth’s, James Gillray’s et al – and it’s the ideal place to call it a day. After all, Andrew Edmunds on Lexington Street has a wealth of fine wine and some ideal outdoor seating.

What single print would Helen take away from this year’s show? ‘It would be a Picasso from Frederick Mulder,’ she tells me. Frederick Mulder is a Belsize Park-based private gallery established in 1971. Mulder specialises in the fabulously distinctive works of Picasso and Edvard Munch, and on show will be a veritable selection of treasures. Helen, as the director of the fair all these years, is a devoted original print collector herself, confessing to a monochrome wall of prints in her home study and an epic Jim Dine print on another wall – showcasing the versatility of these works.

The prints, whether abstract colour blocks or fabulous cartographic celebrations of London, are a joy to encounter. Bridget Riley’s works – the nonagenarian artist – are in high demand and so are Scottish artist Elizabeth Blackadder’s (whose works will be showcased by Glasgow Print Studio). Much of the beauty is in the discovery – never quite realising you needed a print until you saw that particular one – which is why a whip around London is a must do from Saturday.

The London Original Print Fair will take place across London, 1 – 8 May; Londonoriginalprintfair.com
Be sure to book your timed slot via the website as due to social distancing requirements in some galleries