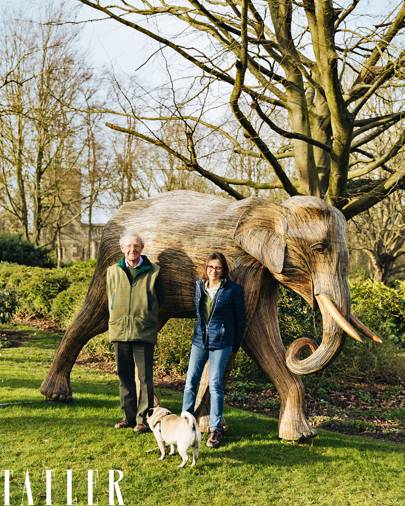 ‘They did attract rather a lot of attention when they were lifted in,’ laughs Lord Carrington. He’s talking about the four life-sized elephant sculptures, crafted out of an invasive weed (Lantana camara) by artists living in the jungles of Tamil Nadu, that have been living in his garden for the past five months.

But how did these elephants find their way from India to Rupert and Daniela’s Buckinghamshire garden? They’re part of a 125-strong herd that was due to migrate to the Royal Parks of London last summer with CoExistence, an environmental art campaign dreamt up by the Duchess of Cornwall’s late brother, Mark Shand, in aid of his conservation charity Elephant Family. But the pandemic struck and the installation was postponed, leaving the elephants locked down on the Cotswold farm of Ruth Ganesh, the Elephant Family’s principal trustee. That’s when Camilla came up with the idea of an elephant adoption agency. The herd was dispatched to some of the most beautiful gardens in England: four went to Highgrove, five each to Lady Bathurst at Cirencester Park and Lord Rothschild at Waddesdon Manor nearby, three to Annabel Elliot in Dorset and two to Jilly Cooper in Gloucestershire, who declared proudly: ‘Aren’t they just glorious?’

The Carringtons too have grown fond of the glorious additions to their garden. The adolescent – renamed Elvis by the family – will return as a permanent fixture after the exhibition this summer. He will be in esteemed company, thanks in large part to Rupert’s father, Peter, a distinguished Conservative statesman, Margaret Thatcher’s foreign secretary and once the longest-serving member of the Lords, who sourced pieces for the 2.5-acre sculpture garden in an innovative way. ‘He rang up a friend who was the chairman of the Royal Academy and said, “Please tell me who the up-and-coming sculptors are,”’ explains Rupert. The garden is now dotted with striking artworks including Fallen Angel by Peter Randall-Page, a slate sculpture by Alistair Lambert and a gorilla by Michael Cooper.

Peter and his wife, Iona, moved to the Manor House in Bledlow (bought by the first Lord Carrington – who lived at Wycombe Abbey – as a dower house) after the Second World War. ‘My mother was the plantsman,’ notes Rupert. ‘She really knew her plants from A to Z. My father had the big ideas.’ In 1969, Peter commissioned young landscape architect Robert Adams to transform the eight acres of farmyard, piggeries and paddocks surrounding the Queen Anne house into the spectacular gardens of today. There’s a sunken lily pond surrounded by beech hedges, a walled garden with vegetables and cutting flowers, a herbaceous border with peonies and delphiniums, a croquet lawn and a tennis court. The rose garden, created in memory of Rupert’s mother, is presided over by a large sculpture of a snail – her chief garden enemy. Winding paths, water-loving ferns including gunnera, and spectacular trees such as California buckeye in the Lyde Garden – which is open to the public – create a tranquil setting for all who visit (except some nesting ducks who are losing a turf war with a moorhen).

When Peter died in 2018, Rupert succeeded to the peerage and the planting passion. He and Daniela have been putting their mark on the garden ever since, with the help of three full-time gardeners and a plantsman, plus their children, Robert, Francesca and Isabella, who visit often (despite not fully supporting their grandfather’s decision to fill in the swimming pool). This atmospheric garden has been created with spirited dedication and is ribboned with family pride.

This was originally published in the June issue.