Families of Dreasjon Reed, McHale Rose call on community to act: 'It's not just our fight'

The community came together at 62nd Street and Michigan Road to remember Dreasjon Reed on Saturday, June 13, 2020. Indianapolis Star

Standing on the steps of the Soldiers and Sailors Monument, Demetree Wynn spoke a series of familiar names.

“Breonna Taylor. George Floyd. Rayshard Brooks. Philando Castile,” Wynn said. “And now, something I never thought I would have to say: Dreasjon Reed.”

About 50 people gathered on the steps of the Monument Saturday afternoon to honor the lives of those killed by police, including Dreasjon Reed and McHale Rose, who were shot by Indianapolis Metropolitan Police officers within hours of each other last May.

Since last Sunday, Indy10 Black Lives Matter has has held trainings, chalkings and memorials in their honor, calling the community to act on words of solidarity.

Wynn, Reed’s mother, talked about the toll the last year has taken on her. She’s lost sleep. Half the time, she said, she’s not sure where she is. Her heart is broken, she said. But a year after her son’s death, she’s speaking out. She wants to see police violence stopped, and she wants accountability for families like hers that are dealing with the aftermath.

“Open your mouth and talk,” she said, ” because nobody can hear you when you’re quiet.”

“He was 19 years old at the time of his death. He was just a teenager. Now, he’s a statistic, he’s a hashtag, he’s been demonized, and he’s just a figure to you all,” Nesa Rose said. “But he’s mine.” 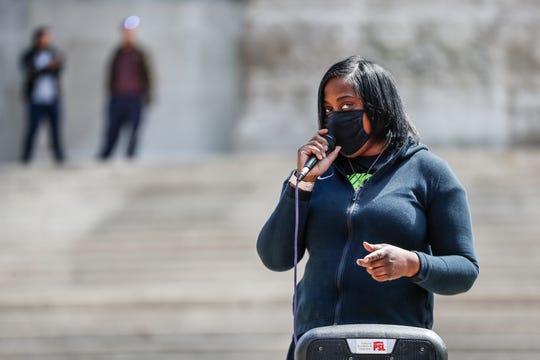 Demetree Wynn, the mother of Dreasjon Rood speaks during a Black Lives Matter protest on Saturday, May 8, 2021, on Monument Circle in downtown Indianapolis.

She ran through the list of their siblings, her parents, her family. He was theirs, too.

“This is a situation that haunts us daily, weekly, hourly, minute-by-minute, sometimes,” she said. “So in this, we just ask that you all continue to say his name, tell his story and stand with us because it’s not just our fight, it’s you all’s fight as well, he was a member of this community, just as anyone else.”

Stepping back to the microphone, Wynn called upon the crowd to back up their words with action. It’s going to take everyone to make change, she said.

“I don’t care what color you are,” she said. “I care what your heart is about.”

Then she led the crowd in a call-and-response: “Say his name” / “Dreasjon Reed”