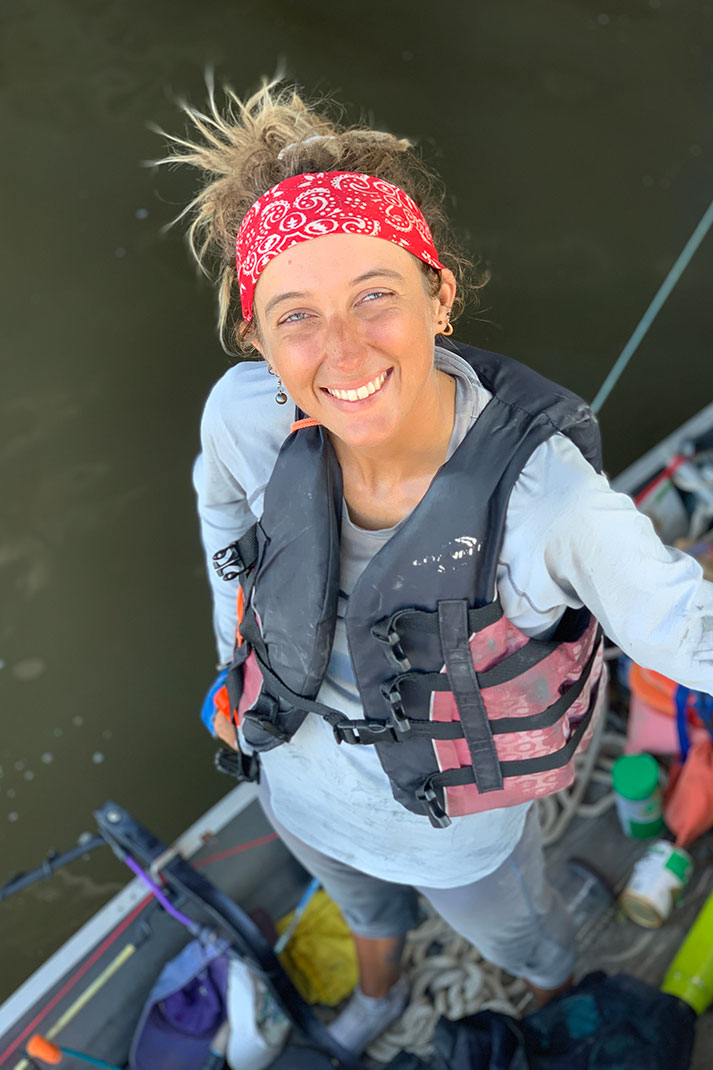 Ellen Falterman’s Bold, New Plan To Row Around The World

In September, Ellen Falterman paddled, or rather rowed, her 18-foot Grumman canoe to her family home on the Trinity River in East Texas, completing a full descent of the Mississippi River, and then some. The journey was the latest in a trio of expeditions on the Missouri and Mississippi rivers for the 25-year-old flight instructor turned river-runner, who has designs on much bigger adventures.

More about that in a moment, but first we go to Brazil, where Ellen’s love of adventure, if not of rivers, was sparked on a three-month trek with her older brother Patrick. When he was 19 and Ellen 12, Patrick stuck out his thumb and started south. By the time she visited him in Brazil six years later, he was exploring the Amazon basin in a 400-pound wooden boat she rather generously describes as a canoe. Starting on the Amazon’s biggest tributary, the Rio Negro, they paddled upstream for weeks, living on cassava flour, fish and monkeys they shot and salted.

“It’s not like I grew up in Houston,” she explains. “I grew up in rural east Texas in the piney woods, and I was with my older brother. I trusted him completely.”

Their objective was a jungle Shangri-La called the Serra do Aracá, a mythic plateau veiled in waterfalls, dense foliage, and tales of hidden treasure. To get there, they worked their way up progressively smaller tributaries until, near the foot of the Serra, the stream was barely wider than their boat was long.

That morning the river rose from knee-deep to chest-high in the time it took to wash the breakfast dishes. They put on anyway and the canoe went sideways, then under a log. Patrick was pulled under, and the bowline wrapped so tightly around his middle that he carried a scar for the rest of his life. Ellen came ashore with little more than her passport and a deck of cards, and the siblings played Gin Rummy for hours until the water receded enough to free the canoe. Their paddles and supplies gone, they cut poles and floated four hungry days to the nearest outpost.

Home in Texas two years later, Patrick crashed his small plane into the Trinity River. The Faltermans are a family of aviators. Ellen makes her living as a flight instructor, which meant that she had to get back in an airplane and fly after Patrick’s death. Rivers took a bit longer.

She’d avoided water ever since their Brazilian misadventure, but Ellen couldn’t bear the thought of being at home on the anniversary of Patrick’s death. So in 2017 she paddled the Missouri River in his memory, 2,300 miles in a borrowed sea kayak. When she reached the confluence with the Mississippi in St. Louis, she knew she’d paddle that river too. Just not yet.

“I’d been talking to the Missouri for so long that the Mississippi was like a brand new person,” she says. “It didn’t feel right continuing down to the Gulf because there was all this water upstream that didn’t know me.”

She came back to the Mississippi in 2019, trading the kayak for an old aluminum canoe, also borrowed, this time from her uncle’s chicken coop. “I asked him, ‘Does it float?’ and he said, ‘Well, it’s got water in it,’” she recalls. Figuring that if the water couldn’t get out, it couldn’t get in either, she dragged the canoe out of the henhouse and mounted a sliding-seat rowing station amidships. She named it Edna, after the grandmother who brought it into the family decades ago, and started down the Mississippi.

Ellen planned to run Big Muddy all in one go, but when her other grandmother, Eve, was diagnosed with an aggressive form of cancer, Ellen left the river to be with her before she passed. She picked up the thread again in 2020, rowing from St. Louis to the Gulf of Mexico, then west along the Intracoastal Waterway, and up the Trinity River to the place her brother Patrick’s plane came to rest in 2016. There she placed a cross on an oak tree, though the journey was the true memorial: a 2,700-mile moving celebration of her brother’s life and way of seeing the world.

“What is the point of doing anything,” she says, “if you can’t find the joie de vivre?”

She did it the way he would have, eschewing high-tech navigational aids and recording her progress on paper maps. “My whole journal is on the maps,” she says. “Any time I had a thought, I’d just write it down on the map where I was.” She marked each campsite with a tiny Maltese cross.

Once, when darkness overtook Ellen in a marsh, she spread her sleeping bag on the tall wet grass and dozed. The tide came in at about 2 a.m. and she broke her flooded camp in the dark, spending the rest of the night tied up to a channel marker. Curiously, she says, there were no mosquitoes. The observation gets to the core of her adventuring philosophy, to shrug off the hardships and embrace the moment. “What is the point of doing anything,” she says, “if you can’t find the joie de vivre?”

She kept no strict itinerary, camping free on islands and cow pastures and half-sunken barges, and resupplying at grocery stores along the way. She spent about $300 a month on the river but still managed to end up broke, having poured her life savings into a down payment on an ocean-going rowboat. She named it Eve, after her grandmother, and plans to row it around the world.

Ellen “Magellan” Falterman has her sights next set on a 40,000-mile, round-the-world rowing journey that will span six years. | Photo: Cindy Falterman