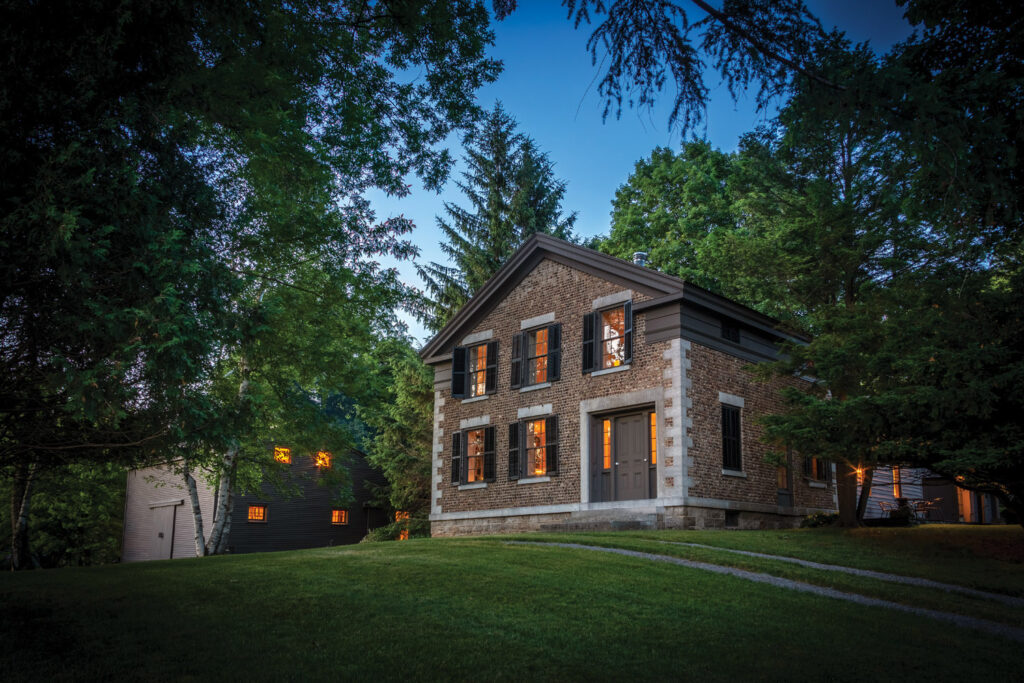 Few people outside of this region in Upstate New York are aware of its cluster of eye-popping cobblestone buildings. Dating from the 1830s–50s, structures that include houses, churches, town halls, and schools were constructed using cobbles shaped by Ice Age glaciers and erosion by water. Exterior walls are made of  rows of cobblestones embedded in lime mortar with attention to decorative effect. This example, a Greek Revival-era addition to an earlier house, is the only one in Fayetteville.

The primary attraction of this historic property is the house of cobblestone masonry, which has direct ties to the Erie Canal “cobblestone period” of the 1840s. Decades of informed work led to its preservation.

The Stone Cottage, as it was named by its original owners, is actually a consuming addition to a ca. 1805 post-and-beam, one-room settlement house—itself an early development in a land claim given to reward a Revolutionary War veteran from the New York regiment. Michael Hutchins acquired the farm after arriving in Fayetteville in 1818.  Between 1835 and 1840, he moved here from his house in the village, and added the Greek Revival-style cobblestone portion to the old frame house.

The 1840s were the height of the so-called Cobblestone Period along the Erie Canal between Syracuse and Buffalo. The Hutchins house is the only cobblestone structure in Fayetteville. The hops and grain farm stayed in the family until 1915. Subsequently, much of the farm was sold, and the house endured a series of earnest but insensitive improvements through the 1950s. It changed hands several times more and was subjected to further compromises, all done to accommodate renters.

From 1969 until 2018, Virginia Denton and her colleague Antje Lemke owned the house. Denton served as Director of the Syracuse University Office of Design and Construction, where she oversaw new construction and renovation of all facilities. She had a lifelong interest in historic preservation. Ginny Denton devoted her free time to the hands-on preservation and restoration of this house. When she introduced modern amenities, they were not period re-creations but rather followed her “good goes with good” sympathy toward the original buildings.

Adaptive reuse was the ethic behind conversion of a small farmhouse, which had been moved to the property, into a scholarly library.

Restoration efforts included bringing back the delicate window muntins and trim details that had been over-painted; and repair of the original wide-plank wood floors and window shutters. The roofing and unsalvageable plaster were replaced in kind. The historic lime mortar was stabilized and repointed in 2006 by Paul Briggs, a mason long recognized for his knowledge of cobblestone structures.

The integrity of the 50-year effort is apparent. After Ginny Denton’s passing, her cousin Christopher Borg gathered a team of preservationists and tradespeople, who brought Ginny’s vision to the finish line in 2020. The property is now curated by new owners sensitive to its special architecture and important place in history.

A second building on the property became an adaptive-reuse project. During the 1950s, a smaller house had been moved to the next lot from a neighboring farm. Virginia Denton’s parents bought it in the 1970s so as to be closer to their daughter. Ginny provided drawings for its renovation, including a living-room addition. Later, Ginny converted the house to a library for her co-owner Antje’s extensive book collection. (Antje Lemke, a librarian at Syracuse University, was an authority on the works of Dr. Albert Schweitzer and the Brothers Grimm, as well as an accomplished violinist.) The second floor is now guest quarters. In 2017, a small kitchen was added.