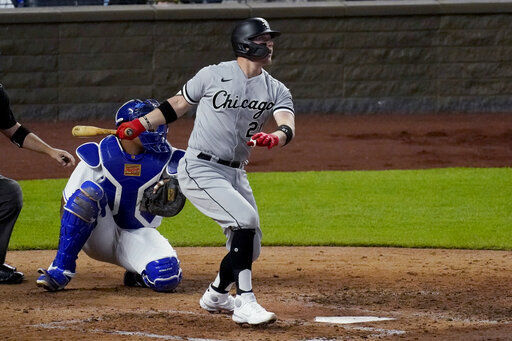 White Sox’s Zack Collins watches his solo home run during the fifth inning against the Kansas City Royals on Friday. 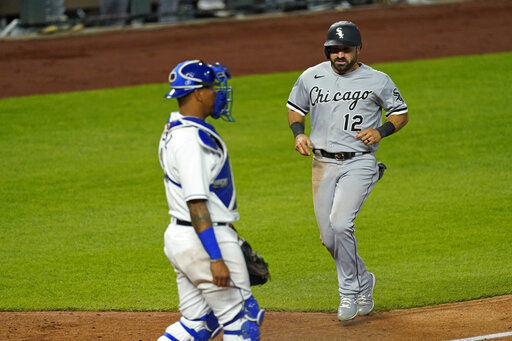 Chicago White Sox’s Adam Eaton (12) runs home to score on a double by Jose Abreu during the sixth inning of the team’s baseball game against the Kansas City Royals on Friday, May 7, 2021, in Kansas City, Mo. (AP Photo/Charlie Riedel)

Fans watch from beyond the outfield fountains during the fifth inning of a baseball game between the Kansas City Royals and the Chicago White Sox on Friday, May 7, 2021, in Kansas City, Mo. (AP Photo/Charlie Riedel)

Kansas City Royals catcher Salvador Perez chases Chicago White Sox’s Zack Collins back to third as Collins tried to score on a ball hit by Nick Madrigal during the seventh inning of a baseball game Friday, May 7, 2021, in Kansas City, Mo. Collins was ruled out at home on the play. (AP Photo/Charlie Riedel)

The Royals were blanked for the second straight game in part of a six-game losing streak, all to division opponents.

Kansas City threatened with two on and one out in the fourth, but the righty worked out of the jam with back-to-back strikeouts.

Collins opened the scoring with in the fifth inning with a solo shot to center. It was just the 26th home run of the year for the White Sox, which is 28th in the league.

Brad Keller (2-4) gave up three runs off five hits in six innings of work with a season-high six strikeouts and a walk. The bulk of the damage came in the sixth inning with RBIs from Adam Eaton and Jose Abreu.

Salvador Perez led the Royals, going 4 for 4 with a double.

Kansas City has lost 11 of the last 13 matchups with Chicago dating to last season.

White Sox: OF Luis Robert (right hip flexor) will not need surgery but faces a prolonged stint on the 10-day injury list.

Daniel Lynch (0-0, 5.79 ERA) will make his second career start for the Royals. Lance Lynn (2-1, 1.82 ERA) will counter for Chicago. Lynn tossed a complete-game shutout with 11 strikeouts in his last start against Kansas City.

PHOTOS: Barber goes from $5 fades in his grandma’s Hammond kitchen to cutting the hair of White Sox stars