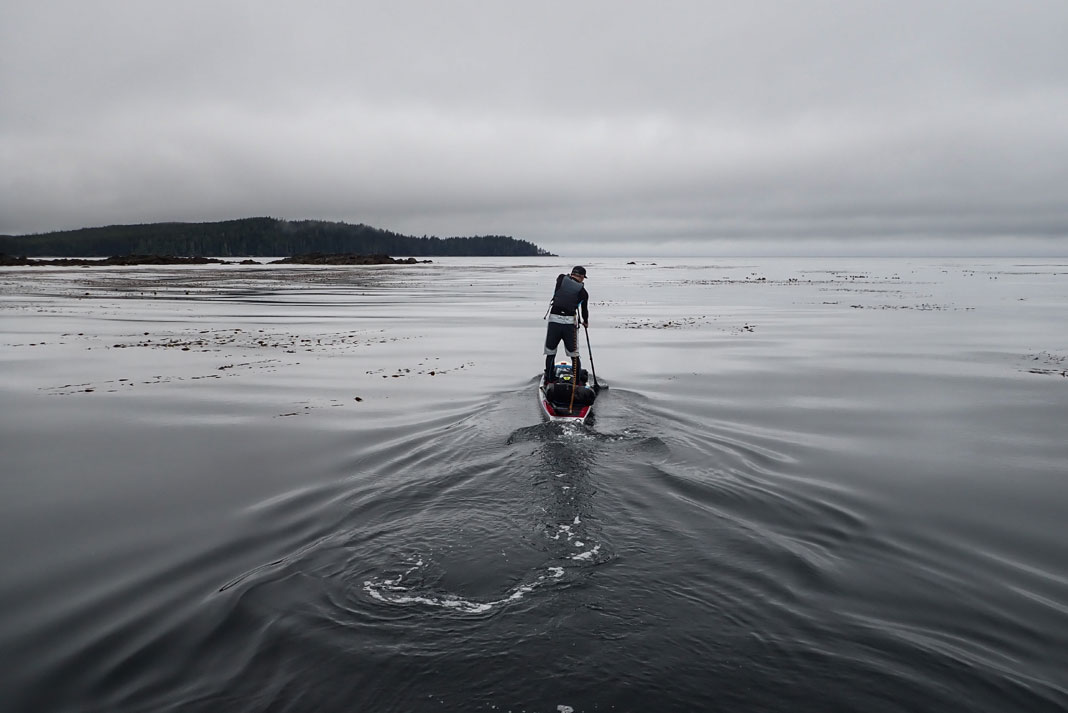 Bruce Kirkby Pushes The Limits Of SUP At Cape Scott

Years ago, while traversing Vancouver Island’s outer coast by paddleboard, I chose to avoid Cape Scott’s capricious waters. Instead, I portaged a narrow sand tombolo, following a centuries-old Nahwitti portage trail, where heavy dugout canoes were once dragged in efforts to avoid dangerous waters with names like achdem (foam place), nomas (sea monster) and tsequime (trail on the surface).

But ever since, the Cape had haunted my imagination.

So last summer, longtime expedition partner Norm Hann and I set out from Port Hardy—a quiet fishing community in the north of the island—with seven days of food and gear lashed to our boards. We weren’t aware of anyone previously rounding Cape Scott by SUP, but that was beside the point. We both love exploring wild landscapes, and together pushing the limits of what seems possible aboard a SUP.

Afternoon gales were building by the time we finally departed the busy harbor, and we soon had tucked into a draft, scratching our way along a rocky coast, darting from headland to headland with waves crashing over our bows. It took three hours to reach Songhees Creek, a sheltered beach tucked beneath towering Sitka spruce. A pair of curious seals watched as we cooked a quick dinner. Later, while lying in the tent, the haunting cry of a bald eagle echoed over the dark waters. Already, modernity had slipped far behind us, and we’d entered a wilder and more primal world.

The next morning, we faced our first major obstacle: Goletas Channel. This narrow waterway funnels the prevailing northeast winds and tidal currents. Lined by a sheer rock offering no chance for respite, paddlers must run the entire 24-kilometer gauntlet in a single shot.

On the water before dawn, we raced over glass waters, a gentle ebb tide carrying us on. Three hours later, sweaty but happy, we emerged on the far side. Beyond, we passed Tatinall Reefs (where waves and current pile up) and Cape Sutil (the most northerly point on Vancouver Island), before camping amid dunes at Shuttleworth Bight, where crashing knee-high surf eased us to sleep.

Another day of paddling, past increasingly rugged beaches and windswept forests, over dark sparkling with herring and feeding humpbacks, brought us to Experiment Bight—the last pullout before the notorious Cape.

Following a muddy trail out towards the distant headlands, we emerged from old-growth forest to a scene unlike anything I’d witnessed before. Lines of dark swell heaved on the horizon, breaking a kilometer or more offshore. Closer in, foam and waves exploded from a maze of rocks and islets. Unbeknownst to us (on the protected north coast), a strong southerly wind had been blowing for days, leaving the ocean in turmoil. For some time, neither of us said a word. Clearly, we weren’t going around the Cape any time soon. On a deeper level, we both felt humbled. And intimidated.

Thirty hours later, the storm finally began to ease. That night, the weather radio announced northwest gales would build the following morning. It was a typical West Coast weather pattern, but it meant the only possible window was a slack tide near dawn. After that, the ocean would again be a mess.

We fell into an uneasy sleep, heads churning with questions. Would the swell ease overnight? Could we see sufficiently clearly to paddle at 5 a.m.? Would we be able to sneak around the headland before the gales arrived?

Watch alarms hummed at 4 a.m., but we were already awake, having slept restlessly. Twenty minutes later, our gear packed, we gulped down energy bars and water. Coffee and oatmeal could wait.

We planned to launch at 4:45, giving us a short window to get around the Cape before flood currents built. But we couldn’t see a thing. So, we paced the beach, waiting. At 4:55, we pushed through knee-high surf. The sky above was a dark purple bruise. Far to the east, the sun’s first embers smoldered on the horizon.

Within minutes we’d reached the point of no return: an immense black rock separating Queen Charlotte Sound from the open Pacific. A stiff northwest wind was blowing, generating a chaotic, three-foot chop. More unsettling, the powerful southwest swell had not abated overnight. Dark sets rose from the ocean, three meters tall or more, exploding over shallow reefs. There was no discussion. The situation wasn’t ideal, but it was within our abilities. Without a word, we paddled on, entering a world of black, gray and white.

Then a wave caught my tail, sending me tumbling
forwards across my nose. Suddenly I was underwater.

Ghostly waves exploded upwards around us. The tide turned, slowing progress. A monster wave reared up and broke, exactly where we’d been headed, so we pointed further out to sea. Surf scooters streamed past at waist height, in long lines reminiscent of smoke. Then a wave caught my tail, sending me tumbling forwards across my nose. Suddenly I was underwater. Silence. And up again.

“You okay?” Norm yelled, but I was already on my feet and paddling—proving a long-held theory that paddleboards, and the ability to leap back on, have significant advantages in serious situations. I shudder to think of a capsized kayak in those waters.

Steadily we inched southwards. Brace, paddle, brace. At some point, we realized we were past the worst of it and rafted up. Tiny corks tossed on a massive ocean. Norm’s eyes told the story: we’d experienced something quasi-spiritual in those few miles. Hours later, we landed on the sprawling white sand beach of Lowrie Bay. The open coast lay before us.

Rounding Cape Scott was like passing a portal—both outer and inner. We now found ourselves alone in raw, windblown wilderness. Wandering white sand beaches and rocky islets, we kept eyes alert for Japanese glass fishing floats. The scotch emerged from the bottom of the drybag. Time stretched out in a comforting way.

Days later, we entered San Josef Bay’s protected waters, paddled up a quiet estuary, and saw the glint of sunlight on windshields. The wilderness had released us.

Going where no board had been before. | Photo: Bruce Kirkby

Bruce Kirkby is a photographer and writer living in Kimberley, B.C. A member of the Starboard Dream Team, his third book, Blue Sky Kingdom, was released in Fall 2020.