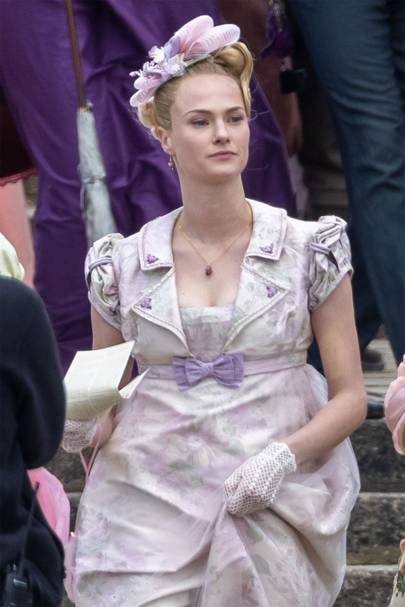 Given the indisputable success of its first series, it’s unsurprising that Netflix’s Bridgerton quickly received the green light for not just a second instalment, but Seasons 3 and 4 too. With so much material from Julia Quinn’s Bridgerton novels to explore (most of the books in the historical romance series focus on a different Bridgerton sibling), fans of the show can look forward to plenty more spectacle and scandal in the years to come. Now, filming for Season 2 is officially underway, with the first on-set photos offering a tantalising taste of what devotees can expect in the new series.

Another pair of actresses making their Season 2 debut were also spotted on set – albeit with their period costumes partly obscured by blankets and coats as they kept warm between takes. Melissa Advani and Priya Kansara will be playing new characters Lady and Miss Eaton, respectively, with the on-screen mother and daughter donning light blue and lilac ensembles for the day’s filming.

Other new additions pictured on set included Shelley Conn, who has been cast as Lady Mary Sharma. She was spotted in an elegant deep purple and burgundy costume – in contrast to some of the other more saccharine colours – alongside a male actor and a young girl. Lady Mary is the mother of Kate, played by Sex Education’s Simone Ashley, who will have an important role in Season 2 as the love interest of Daphne’s older brother, the young Viscount, Anthony Bridgerton (Jonathan Bailey).

Some scenes made use of the Old Royal Naval College’s grand neoclassical façade, with a smart carriage drawn by four bay horses forming an impressive backdrop to the action. The stunning world heritage site is often used as a filming location, having also featured in big-budget productions like Bridgerton’s fellow Netflix hit, The Crown, and the 2013 Marvel film Thor: The Dark World.

There are plenty of changes afoot in the upcoming season of Bridgerton, which shifts the focus from Daphne to Anthony – with Regé-Jean Page sadly not reprising his role as the Duke of Hastings, much to the disappointment of fans. Loosely adapted from Julia Quinn’s second novel in the series, The Viscount Who Loved Me, it follows Anthony’s quest to find himself a bride in the competitive marriage market of Regency London.

Calling all Bridgerton fans: There’s a Queen Charlotte spin-off in the works

Speaking on American daytime TV talk show Today with Hoda & Jenna earlier this year, showrunner Chris Van Dusen stated: ‘We have a bunch of new characters we are going to be introducing… I think it’s going to be as sweeping and moving and as beautiful as viewers of the first season have come to expect from the show.’

With Deadline reporting that filming is expected to take six months, fans can most likely look forward to Bridgerton’s glorious return to the small screen some time in 2022.

Sign up to the Tatler About Town newsletter to receive the latest party pictures, fashion inspiration and royal news straight to your inbox.