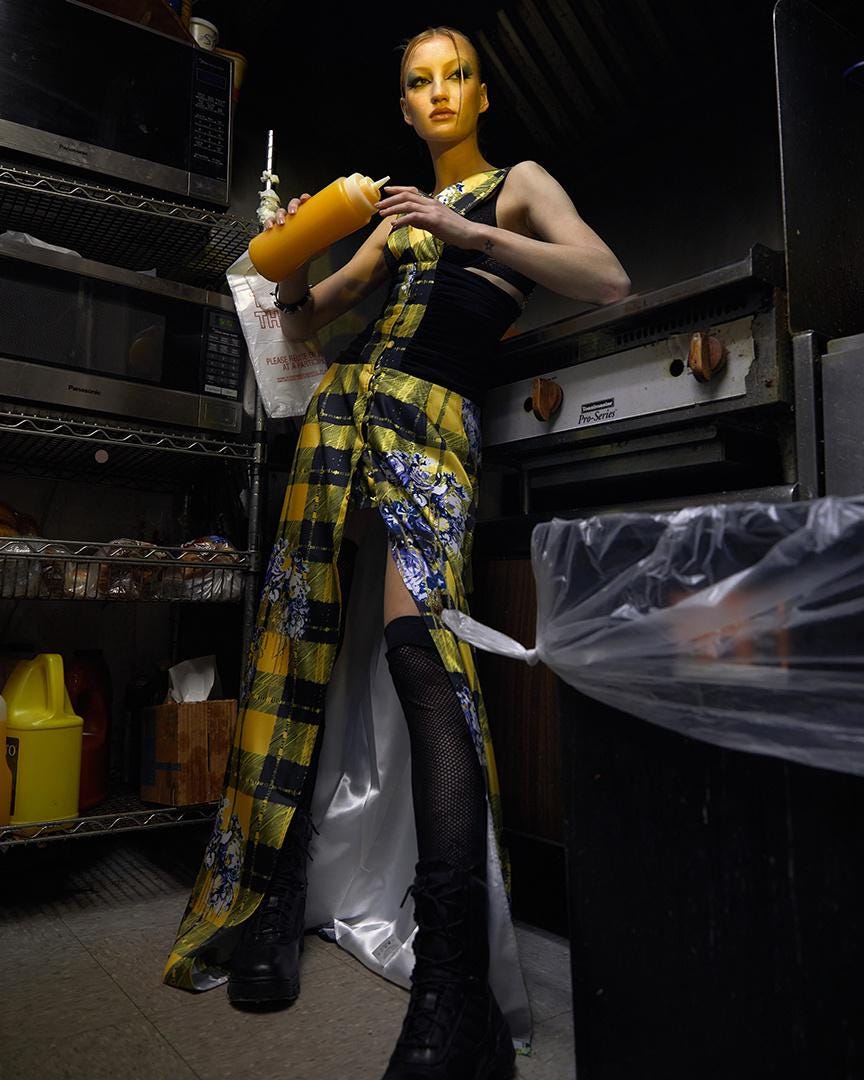 Not many people associate sustainable fashion and couture with edgy, punk style, and that’s exactly how Kate Wasserbach likes it. The designer and founder of Abel Honor New York thrives on creating the unexpected, which is how she came up with the idea for her newest collection, Avant-Contention.

The collection, which debuts today, June 25, is the brand’s second, and is inspired by the punk subculture in the U.K. The silhouettes are cool and sexy, the prints and patterns are dark and sleek, and every piece is tinted with Japanese cyberpunk cinema influences—which were at the heart and soul of the ’70s punk movement in Japan.

Wasserbach said her intention with these new designs was to give “an aristocratic elegance” to the “hardcore” punk movement. Fittingly, her main muse for this season was Johnny Rotten from the Sex Pistols, who back in the ’70s was known not only for his music, but for his patterned suits, spiky neon hair and gloomy, elevated street style.

The term “street style” is commonly associated with punk fashion, but Wasserbach said punk actually has an element of exclusivity that is rarely talked about, and which ties it to couture.

“Punk is commonly thought out to be ‘thoughtless,’ when in reality, the movement is anything but. In fact, the punk movement is the definition of luxury,” she said. “One of the reasons why punk and luxury are similar is because it is spirited through the haute couture concept—with handmade juxtapositions and custom creations.”

Wasserbach creates luxury with sculptural silhouettes, high-quality fabrics and elegant layering. A lot of her pieces incorporate sheer, retro-lingerie-like elements, paired with daring prints. “It gives the viewer a break, all the while blending two scenarios that wouldn’t usually be in the same category,” she said.

It’s unusual, but Wasserbach said, “Nothing about the punk movement is for the masses.” Everything is about individuality and “anti-establishment,” which, in terms of fashion, means garments are meant to be customized, or one of a kind. This concept of total liberation and possibility, the designer said, will outlast any trend.

With longevity always in mind, Wasserbach said she embraced sustainability the moment she launched her company. She doesn’t like to advertise it too much, she said, because she doesn’t want it to seem like she’s only using the term as a buzz word. The reason she produces sustainably, she said, is because she is committed to quality and doesn’t feel like wasting materials and resources.

All of AHNY’s fabrics from this collection came from deadstock from the season before. And if the team ever tries out a new fabric, they’ll save all the scraps to use them in future garments. “There is zero waste in product,” the designer said. “That goes for trims and screens as well.”

Wasserbach said she thinks ’90s grunge is having a moment in fashion right now, but she doesn’t think punk, as a music-inspired “lifestyle,” will make a full return. Having said that, Wasserbach likes being the odd man out, and she hopes that in an industry of repeating trends and copycat styles, her newest collection will bring something fresh to the scene.